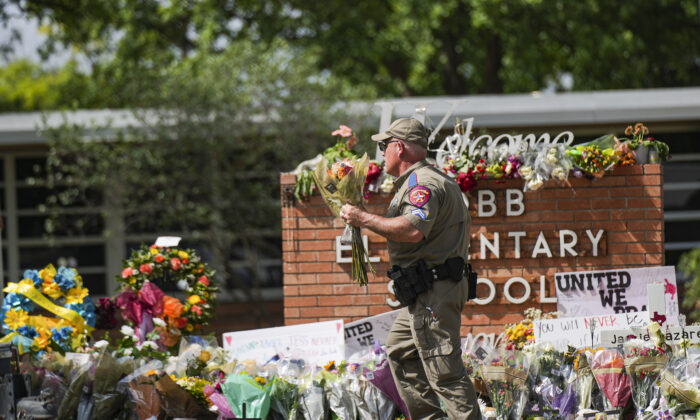 A makeshift memorial at Robb Elementary School is filled with flowers, toys, signs, and crosses bearing the names of all 21 victims of the mass shooting that occurred on May 24, in Uvalde, Texas, on May 27, 2022. (Charlotte Cuthbertson/The Epoch Times)
Congress

Sen. John Cornyn (R-Texas) defended the law enforcement response after it was confirmed they waited about an hour outside the Uvalde, Texas, school during last week’s mass shooting.

The Texas senator—who was recently tapped by Senate Minority Leader Mitch McConnell (R-Ky.) to work with Democrats on possible gun control rules—claimed that criticizing first responders after the shooting, which left 19 children and two adults dead, is “distracting and unfair.”

“The second-guessing and finger-pointing among state and local law enforcement is destructive, distracting, and unfair,” Cornyn said this weekend.

Officials have said that it took well over an hour for police to enter the building after the shooter, 18-year-old Salvador Ramos, entered Robb Elementary School. It drew condemnation from both Gov. Greg Abbott and Lt. Gov. Dan Patrick, both Republicans, with Patrick saying the move cost children’s lives.

Meanwhile, according to social media posts from police, there was an active shooter drill at Robb Elementary in March, which instructed first responders to “stop the killing” and added an “officer’s first priority is to move in and confront the attacker.”

“On Monday the UCISD Police Department hosted an ‘Active Shooter Training’ at the Uvalde High School. Our overall goal is to train every Uvalde area law enforcement officer so that we can prepare as best as possible for any situation that may arise,” the police department wrote two months ago online.

When asked about what is being done to hold police responsible for the delayed response, Cornyn wrote: “My only point we need a thorough investigation and to nail down facts before reaching a conclusion. Accountability should follow.”

The head of the Texas Department of Public Security, Steve McCraw, told reporters Friday that it was the “wrong decision” for officers to wait, explaining that the “on-scene commander at the time believed that it had transitioned from an active shooter to a barricaded subject.”

“A decision was made on the scene—I wasn’t there—that this was a barricaded subject situation, there was time to retrieve the keys and wait for a tactical team with the equipment to go ahead and breach the door and take on the subject,” McCraw said. “At that point, that was the decision, that was the thought process.”

Ramos entered Robb Elementary School in Uvalde through a door that was propped open by a teacher just minutes before, McCraw added. McCraw said that there was also no school resource officer at the school, and he could not say why. The officer, he said, later responded when someone called 911.

On Saturday, Rep. Tony Gonzales (R-Texas) told Fox News that when he visited Uvalde, officers told him that first responders were “scrambling” to locate a tool to pry open a school door to engage the shooter.

Last week, McConnell told CNN that he directed Cornyn to begin discussions with Democrats, including Sens. Chris Murphy (D-Conn.) and Kyrsten Sinema (D-Ariz.), to see if they can work together on legislation targeting guns.

“I met with Senator Cornyn this morning. As you know he went home yesterday to see the family members and begin the fact finding of this awful massacre and I have encouraged him to talk with Sen. Murphy and Sen. Sinema and others who are interested in trying to get an outcome that is directly related to the problem. I am hopeful that we could come up with a bipartisan solution,” McConnell said, without elaborating.