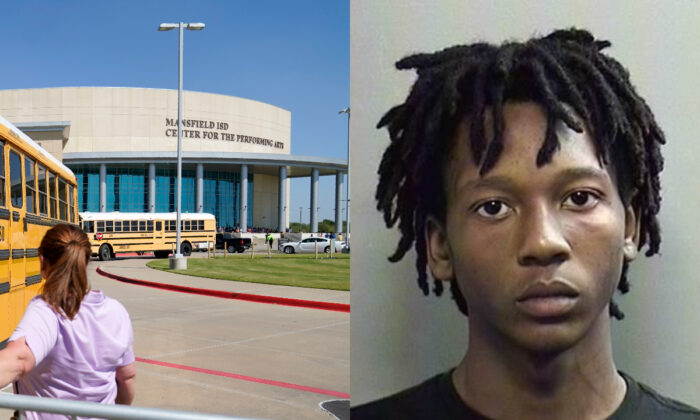 On left, school busses depart past a law enforcement official after dropping off Timberview High School children at the Mansfield ISD Center For The Performing Arts, following a school shooting in Mansfield, Texas, on Oct. 6, 2021. On right, shooting suspect Timothy Simpkins is seen in a mugshot. (AP Photo; Arlington Police Department)
Crime and Incidents

An 18-year-old who eyewitnesses say opened fire in a high school in Texas this week was released from jail on bail on Thursday.

Timothy Simpkins walked out of the Tarrant County Jail accompanied by relatives and entered a vehicle without speaking to reporters.

Simpkins must wear a GPS monitor and was ordered by Tarrant County Magistrate Judge Brooke Panuthos to remain under home confinement and submit to drug and alcohol testing, WFAA-TV reported.

The release drew criticism from some.

“How does this keep managing to get worse,” the sister of Timberview High School teacher Calvin Pettitt wrote on Twitter.

Pettitt was one of four people shot by Simpkins after a fight broke out in a classroom on Wednesday in the high school, according to police and school officials.

Witnesses told police officers that they saw two male students fighting, one of whom was identified as Simpkins. When somebody intervened in the brawl, Simpkins went to his backpack, grabbed a gun, and opened fire, according to an arrest affidavit.

All of the victims survived the shooting.

The firearm was a .45-caliber handgun that was said to have been possessed illegally.

Simpkins turned himself in and was charged with three counts of aggravated assault with a deadly weapon.

Relatives of the suspect say he was bullied in recent months and had became fearful of going to school, driving him to take a weapon.

“I’m not trying to justify the gun that was brought, but when you’re being bullied, when there’s bullies, throughout this nation you hear of young people … committing suicide,” Carol Harrison Lafayette, a relative acting as the family’s spokesperson, told reporters on Wednesday night.  “The decision he made, taking the gun, we’re not justifying that. That was not right. But he was trying to protect himself.”

“We ask as a family for forgiveness of any type of hurt,” she added when asked if she had a message to victims and their families.

One of the victims, a 15-year-old student, needed surgery but was recovering, officials said. An adult male, 25, identified by family members as Pettitt, was in good condition, while a teenage girl who was struck was released from the hospital after treatment. The fourth victim, a pregnant adult woman, did not require hospital care.

Video footage circulating on social media appeared to show the fistfight that preceded the shooting and Kevin Kolbye, Arlington’s assistant police chief, said officers are aware of the bullying allegations.

“Even if you’re bullied there are other options besides carrying a gun into a school and using a gun in a situation like that. That’s just not acceptable,” he told KDFW-TV.

Officials have seen an increase in youth carrying weapons in recent years, he added, which he described as “not a solution to any type of violence or anything like that.”

Mansfield school district spokesperson Donald Williams told reporters Wednesday he wasn’t sure if the shooting was linked to bullying. He said an investigation would probe the matter.

“We’re going to continue to investigate this particular situation and the students that are involved will be dealt with in accordance to our Student Code of Conduct,” Williams said.