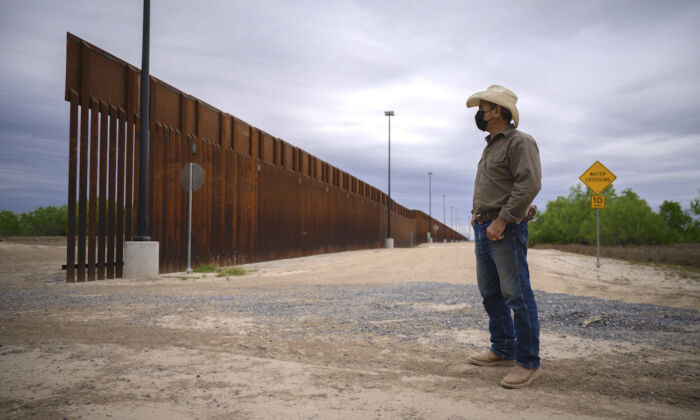 A ranch owner stands before a portion of the unfinished border wall that former U.S. President Donald Trump tried to build, near Roma, Texas, on March 28, 2021. (Ed Jones/AFP via Getty Images)
US

As a human tidal wave continues flowing across the U.S. southern border from Mexico, cattle ranchers in Texas are scrambling to deal with the destruction done by illegal immigrants and human traffickers.

There were 201,800 encounters between U.S. Border Patrol agents and illegal aliens along the southwest land border in April, according to data released by the agency’s office.

April marked the highest number of detentions on record for the month. Border agents in Texas handled the highest volume, arresting an average of 4,260 illegal immigrants per day.

In Victoria, along the upper Gulf Coast in Texas, Stephen Diebel and his family have been ranchers for five generations. Even 186 miles from the Mexican border, he has experienced issues with property damage from illegal border-crossers.

He said ranchers closer to the border have it much worse. They suffer everything from destroyed livestock fences to broken water lines and armed intimidation from human traffickers and illegal immigrants.

Diebel is also vice president of the Texas and Southwestern Cattle Raisers Association (TSCRA) and chair of the organization’s border security task force.

He said illegal immigrants and their transporters, many of whom are members of Mexican drug cartels, have even set fires on ranchers’ property.

“At the borders, [ranchers] see even more extreme circumstances like water lines being cut [and] fires started just for detection or invasion purposes,” Diebel said.

The practice of lighting fires carries an extra layer of danger, since Texas is currently experiencing a years-long drought that directly affects more than 16 million people.

In March, a series of wildfires burned more than 54,000 acres of land, resulting in more than $23 million in agricultural losses, according to Texas A&M AgriLife Extension Service economists.

When it comes to livestock fences, illegal immigrants and their traffickers have two ways they handle the barriers: cutting or bailouts.

“When you have the cartel leading these groups across, they want to make it as easy as possible,” Jeremy Fuchs of TSCRA told The Epoch Times.

Fuchs said their goal is to walk straight through the property without climbing over anything. However, the cutting and removal of livestock fencing allow cattle to escape, sometimes into areas near busy roads, posing a threat to vehicle drivers and cattle alike.

It also equals considerable money lost when cows escape into the wilderness. A single head of cattle can represent up to $5,000 of revenue, depending on the cow’s weight, gender, and breed.

Both Fuchs and Diebel said that knocking down entire fences on a ranch has become commonplace, costing thousands of dollars in repairs. This is especially prevalent when the immigrant groups loaded into vehicles are trying to avoid law enforcement.

“This is what they refer to as a bailout. They’ll drive through the fence to get as far away as they can and will all jump out of the truck and go hide in the woods,” Fuchs said.

Damage caused by bailouts and fence cutting has already cost Texas ranchers thousands of dollars. The state has 248,800 farms and ranches totaling 130.2 million acres. Many of these are situated along the state’s 1,254-mile border with Mexico.

And with fortified livestock fencing costing upward of $2.50 per linear foot, the cost for repairs adds up fast.

Fuchs said several TSCRA members have dealt with 20 to 30 bailouts in the past three months alone.

On top of that comes the cost of rebuilding broken water lines.

“As they are trying to hide, they are also trying to get the resources they need to survive this trek,” Fuchs said.

“A lot of times, we see them digging into and breaking water lines and things like that to get access to water without going up to a spigot by the house or a trough that’s in plain view.”

Ranchers’ encounters with armed intimidation from traffickers and illegal immigrants have created what some feel is an impossible uphill battle to protect their livelihoods.

Richard Guerra owns an 8,000-acre ranch in Starr County along a section of the Rio Grande that U.S. border officials consider to be the most volatile part of the entire southern border.

“I’m going to step lightly and tell you we do carry our guns. I’ve had armed intrusions here before,” Guerra said.

Earlier this year, in March, Texas Gov. Greg Abbott dispatched about 30 National Guard members at intervals along U.S. Route 77 near private ranches as a deterrent for unlawful immigrants and their transporters.

Last July, Abbott encouraged Texas ranchers and landowners in border communities suffering from the migration crisis to complete a survey to help identify damages as part of the state’s ongoing efforts to secure the border.

Rep. Stephanie Bice (R-Okla.) introduced the Securing American Families from Exploitation at the Border Act, or the SAFE Border Act, in December 2021.

Among the proposed benefits for besieged ranchers and landowners is funding for increased security against physical threats and property damage. There would also be compensation for those who’ve experienced vandalism, theft, or other losses related to illegal immigration.

In February, the U.S. Department of Agriculture’s Natural Resources Conservation Service (NRCS) in Texas announced financial assistance for farmers and ranchers in 34 counties along the border.

“We understand that the field and farming infrastructure damages along the border are costly and have a negative impact on our natural resources that our farmers and ranchers work hard to conserve,” said Kristy Oates, an NRCS state conservationist.

In his January lawsuit against the Biden administration for an unlawful 100-day freeze on deportations, Paxton revealed that illegal immigration is costing Texans more than $850 million per year.

“The cost of illegal immigration is an unconscionable burden on the taxpayers of our great state. If we use the minimum estimated costs for services Texas provides to unlawfully present and undocumented aliens, taxpayers are shelling out an estimated $855 million every year,” Paxton said.

He said Texans will always welcome those who immigrate to the United States through the appropriate legal channels, but that it’s simply impossible to keep forcing taxpayers to foot the bill for individuals who choose to “skip the line.”

“The point of our landowners is the frustration; they feel like no one is listening. It’s a really delicate issue, but a very important issue,” Diebel said.