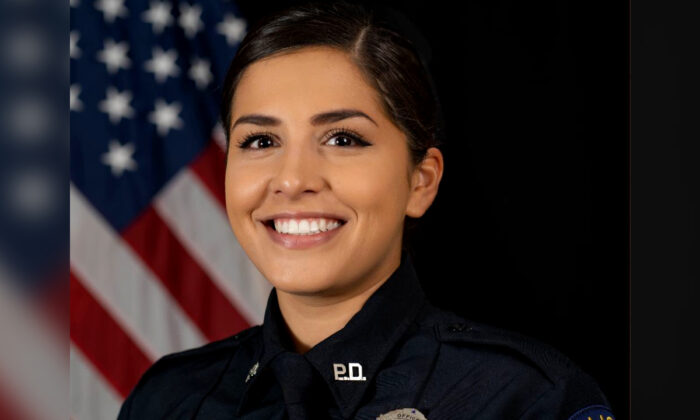 A Texas police officer who was shot in the face by a male suspect early July 23 is recovering in the hospital and is in stable condition, officials have said.

Missouri City Officer Crystal Sepulveda, 29, a three-year veteran of the force, was shot three times—in the face, in the foot, and in the calf—early on July 23 after she and other officers spotted a vehicle that was stolen in an aggravated robbery the previous day in north Harris County, Houston police said at a news conference on July 23.

Sepulveda and other officers saw the stolen car at a Houston gas station, Chief Troy Finner said, and called for backup.

The driver of the stolen vehicle, an African American male, allegedly refused to pull over when requested to do so by police, and a chase ensued.

The suspect stopped his vehicle in front of a house and ran either alongside the house or into the backyard of the home before firing at officers and striking Sepulveda, police said.

As of July 23, she was in a stable condition, police said, and is expected to make a full recovery.

“She is a strong officer and she will make it through this,” Lance Bothel, Missouri City assistant police chief, said.

While the officer was being transported to the hospital, multiple law enforcement agencies responded to the scene and set up a perimeter in search of the suspect, who was later located in a backyard.

He shot at the officers, who returned fire, striking the suspect “multiple times,” police said. The suspect was transported to a local hospital where he was later pronounced dead.

Police didn’t reveal the identity of the suspect but said that he was between 25 to 30 years old.

Finner said the suspect was armed with “two automatic pistols with extended magazines.”

“That’s what we’re facing and everybody needs to know it,” Finner said while asking for prayers for “men and women on the front line.”

An investigation into the incident is ongoing.

Meanwhile, a fundraiser for Sepulveda has been set up by the Missouri City Police Officers Association-Fraternal Order of Police Lodge No. 594 and has raised more than $31,000 as of July 25.

Sen. Ted Cruz (R-Texas) wrote on Twitter that he and his wife, Heidi, were relieved to hear that the Missouri City police officer is “in stable condition after being shot in the line of duty last night.”

“We are grateful for the heroes of law enforcement who keep our communities safe every day,” he said.