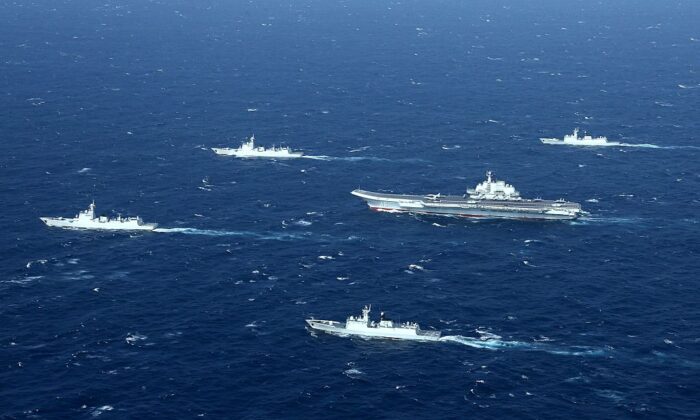 A Chinese navy formation, including the aircraft carrier Liaoning (C), during military drills in the South China Sea, on Jan. 2, 2017. (STR/AFP via Getty Images)
By Frank Fang

A Texas man convicted of stealing U.S. marine technology to benefit China has been sentenced to 16 months imprisonment.

Shi Shan, 55, a naturalized U.S. citizen living in Texas, was convicted in July last year of conspiracy to commit theft of trade secrets. In addition to the prison term, Shan was ordered to forfeit $342,426.96, according to a Feb. 11 press release from the U.S. Department of Justice.

“The Court made clear that the defendant knew or intended that the offense would benefit the People’s Republic of China,” said U.S. Attorney Timothy J. Shea for the District of Columbia, according to the press release.

Shea added: “To those who would steal proprietary information from U.S. companies and provide it to a foreign government, our message is that you will be prosecuted to the fullest extent of the law.”

Shi made an agreement with Chinese company CBM Future New Material Science and Technology Corp. (CBMF) to help it develop a syntactic foam, which is a strong, lightweight material that has both commercial and military applications, such as deep-sea oil and gas drilling.

According to the press release, Shi promised to develop the foam by “moving to ‘digest/absorb” relevant U.S. technology.

Subsequently, Shi went on to establish a U.S.-based subsidiary of the Chinese company, CBM International (CBMI). He then led a scheme to hire former and current employees at the Houston-based Trelleborg Offshore, and entice them into stealing the latter’s trade secrets relating to syntactic foam.

This was partly done through the U.S. subsidiary attempting business relationships with Trelleborg and other U.S. firms.

Shi took the stolen technology and opened a factory in China that manufactured syntactic foam based on Trelleborg’s technology, according to the press release.

Shi tried to sell syntactic foam based on the stolen technology to state-owned China National Offshore Oil Corporation (CNOOC). Shi and five others were arrested in the United States after they tried to market related-technology in Washington D.C.

In May last year, the U.S. Department of Commerce blacklisted CBMF from doing business with U.S. companies because it participated in the “prohibited export of controlled technology concerning the manufacture of syntactic foam and supplying syntactic foam to PRC [People’s Republic of China] state-owned enterprises, PRC defense industrial corporations, and PRC military-related academic institutions.”

In another case of theft of trade secrets, the U.S. Department of Justice indicted four members of the Chinese military on Feb. 10 hacking the online systems of U.S. credit-reporting agency Equifax. The hackers also stole sensitive data belonging to 145 million Americans.