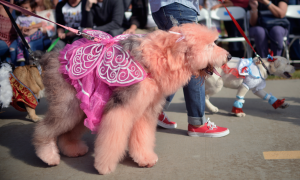 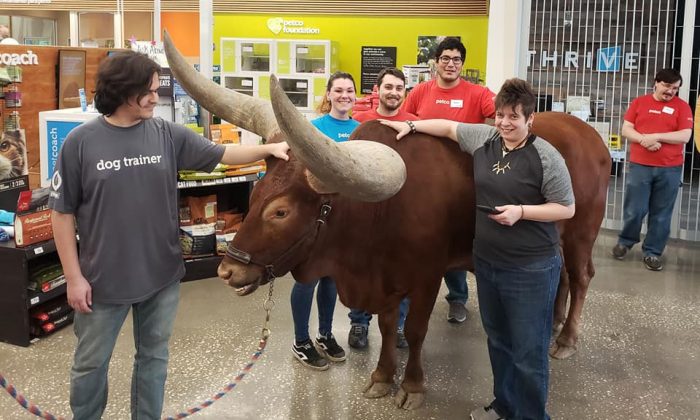 A steer on a leash was brought into a Houston-area Petco on March 18, 2019. (Shelly Lumpkin)
US News

A Texas couple brought an exotic horned steer to a Houston-area Petco store to test the “all leashed pets welcome” policy.

The massive African Watusi steer named Oliver plodded into the store in a video shared by Vincent Browning, the animal’s owner, on Monday, March 18.

Browning posted about the experience on Facebook, saying the pet steer was welcomed “with open arms.”

“The staff members here are always super friendly and courteous to us,” he captioned the post. “We really enjoy coming to this location … our favorite Petco BY FAR!!”

Browning posted a video of him walking the animal on a leash through the parking lot toward the store, with the steer pausing a moment in front of the sliding doors before stepping inside.

“No China shop,” one commenter joked about the video, which showed the steer calmly looking around the store.

A staff member can be seen cautiously approaching the animal, saying “Hi” and petting the steer on its horned head.

At the time of reporting, over 495,000 people have viewed the post.

Oliver is owned and trained by Browning for shows and rodeos—the steer even has its own Facebook page.

While it’s not clear exactly how much Oliver weighs, Oklahoma State University’s Department of Animal Science states that African Watusi bulls typically weigh between 1,000 and 1,600 pounds.

“Ankole-Watusi cattle are the show-stoppers of the bovine kingdom,” OSU states, adding, “These regal animals can easily trace their ancestry back more than 6,000 years and have often been referred to as ‘cattle of kings.’”

The Department of Animal Science adds that many of this breed of cattle were first imported from Africa to European zoos in the late 19th and early 20th centuries “because of their striking appearance, and the resulting ability to attract paying customers.”

Then as the focus at European zoos shifted from spectacle to conservancy, more Watusi specimens became available for purchase. American zoos and breeders began to import the animals in the 1920s and 1930s.

In January 1983, North Americans interested in the breed established the Ankole Watusi International Registry to gather and store pedigree information to help maintain this unique species.

“These members shared a strong commitment to the breed,” OSU states, adding “though they had different priorities for it. Some wanted to concentrate solely on the prevention of breed extinction; some selected for their utility in the production of superior cross-bred roping animals. Still others championed the low-fat and low-cholesterol meat values after these were discovered.”

Meanwhile, thanks to a new bill passed by the Florida Senate Agriculture Committee, pet owners will face fines or even jail time if they abandon their pets during extreme weather evacuations.

As reported by WPTV, the new bill, approved on Monday, March 18, 2019, states that pet owners who abandon or restrain their pets during evacuations could face a hefty fine of up to $5,000. They could also face jail time.

Pet abandonment, under the new bill, is classified as a first-degree misdemeanor.

Recent hurricanes Irma (2017), and Michael (2018) saw an alarming rise in the number of owned animals being abandoned or tied up and left behind. A Senate staff commentary on the new bill stated: “The Palm Beach County Animal Care and Control director reported that many pets are left chained to trees and parked cars,” they said, “as their owner left them behind to ‘ride out the storm’ on their own.”

Distressing statistics from hurricane Irma showed 49 dogs and two cats being left behind to be picked up by animal control officers. Palm Beach County Animal Care and Control Director Dianne Sauve told USA Today that some were tied up, and others were caged or enclosed with no means of getting out.

“There is absolutely no excuse for doing that,” Sauve shared.

*This story has been corrected to indicate that Oliver is a steer, not a bull.