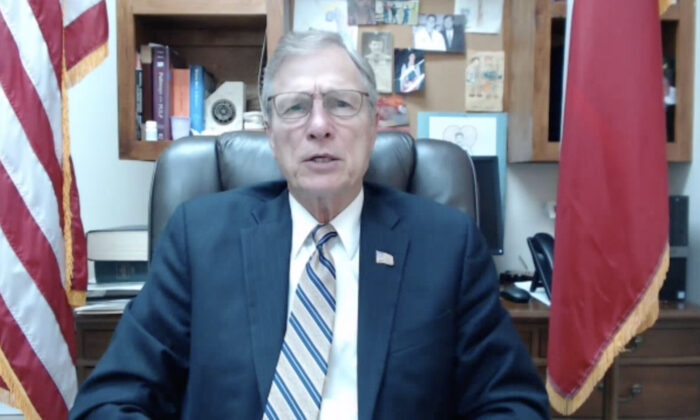 WASHINGTON—The United States should take a “bold stance” against the Chinese communist regime and hold it accountable for illegal organ harvesting from prisoners of conscience, Rep. Brian Babin (R-Texas) said on April 9.

“The U.S. government has stood idly by for far too long,” Babin said in an interview with The Epoch Times. “This is one of the worst practices. It harkens back to the Nazi era in the ’30s and ’40s.”

In early March, a bipartisan group of U.S. lawmakers in the House and the Senate introduced the first legislation to combat China’s state-sanctioned practice of forced organ harvesting, which targets religious and ethnic minorities.

If approved, the Stop Forced Organ Harvesting Act would hold the Chinese Communist Party (CCP) accountable for “these inhumane atrocities,” according to Babin, who has co-sponsored the House bill (H.R.1592).

Similar legislation was introduced in the previous session of Congress in December last year.

While there have been a number of congressional hearings and resolutions condemning forced organ harvesting, there’s no U.S. law that addresses the issue. The international community has remained silent, Babin said, despite the vast amount of evidence, mainly because the CCP is the “bully on the block,” pressuring other governments both economically and militarily.

“I think also here in the United States, we’ve seen people that may have either inadvertently or on purpose—because of profits, because of political pressure—looked the other way. And it’s time to stop doing that,” he said.

It’s reminiscent of how people looked the other way in the 1930s, he noted.

“Had we stood up to Hitler and his regime in those days, maybe we could have saved a lot of lives, even spare ourselves the horror of World War II.”

If enacted, the bill would authorize the U.S. government to identify, expose, and sanction individuals and government officials responsible for human trafficking or organ harvesting across the world.

The bill also mandates an annual report by the U.S. State Department on human organ trafficking in foreign countries. The report would introduce a tiered ranking system for determining which countries have the lowest (tier one), intermediate (tier two), and the highest (tier three) levels of organ harvesting and trafficking. This reporting system would shed light on governments that are directly or indirectly involved in the crime.

“I don’t think the average American has a clue about what’s going on with this forced harvesting of organs,” Babin said, adding that “the more Americans know about this, the better chance we have of pushing back on the Chinese Communist Party.”

“It’s horrible to even contemplate that somebody would be sedated, placed on a gurney because of their faith, and then have a liver removed, or a kidney, and then left to die in the corner.”

The issue of organ harvesting in China has gained prominence following the final judgment issued in June 2019 by the China Tribunal, an independent people’s tribunal based in London.

The tribunal found that the killing of detainees in China for their organs has continued since allegations of forced organ harvesting for transplant surgery first surfaced in 2006. The tribunal concluded that the practice has been taking place “on a significant scale,” with adherents of Falun Gong, a spiritual discipline that’s also known as Falun Dafa, being the “principal source” of human organs.

Evidence of organ transplant crimes continues to emerge in China, with investigative reports indicating that the number of organs harvested continues to surge and that organs are available on-demand, with short waiting times.

If passed, the U.S. bill would end the silence on this issue, according to human rights experts. The U.S. government would be able to deny or revoke passports for people who engage in the illegal purchase of organs.

A 2018 paper published by the journal Genocide Studies and Prevention described the organ harvesting campaign by the Chinese communist regime as a “cold genocide,” slow-motion and concealed, against Falun Gong practitioners in China.

Researchers stated that a cold genocide is a slow and often subtle, multi-dimensional destruction of a group over a long span of time.

It’s the strategy used by former Chinese leader Jiang Zemin, who initiated the persecution of Falun Gong in July 1999, to thoroughly and effectively eradicate the practitioners of the discipline without alerting the international community, according to researchers.

“I agree with that wholeheartedly,” said Babin, when asked if he agreed with the depiction of organ harvesting as a “cold genocide.”

Falun Gong practitioners in China “have been notoriously persecuted,” he said. “There is much evidence, many of it firsthand, that they are having their organs harvested.”

He said other religious and minority groups, including Christians, are vulnerable to being subject to organ harvesting.

“The time to act is now. People are being murdered. And these atrocities will continue as long as we look the other way,” Babin said.