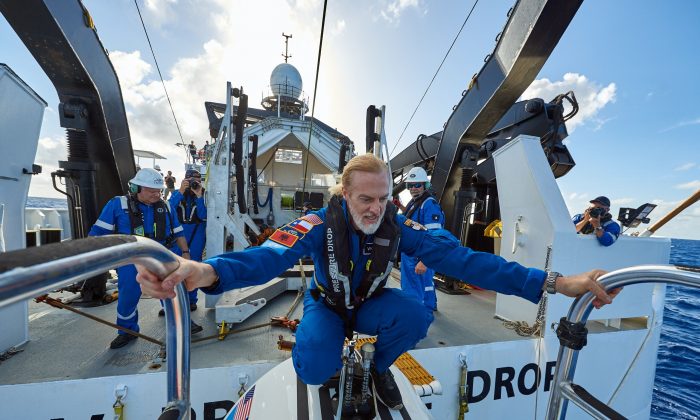 Explorer Victor Vescovo stands atop the Limiting Factor submersible craft, which he used to dive to the deepest point of the Challenger Deep in the Mariana Trench on April 28, 2019. (Reeve Jolliffe/Five Deeps)
Science News

A Texas businessman and deep-sea explorer descended 35,853 feet into the depths of the Pacific Ocean to shatter the record for the world’s deepest dive—and he found plastic trash.

Victor Vescovo, a former U.S. Navy Reserve Commander, dove 52 feet deeper than any human before him, the Five Deeps Expedition team disclosed in a news release (pdf) on Monday, May 13.

“We feel like we have just created, validated, and opened a powerful door to discover and visit any place, any time, in the ocean—which is 90 percent unexplored,” Vescovo said on April 28 after completing his dive down into Challenger Deep, the world’s deepest spot at the southern end of the Mariana Trench.

Five Deeps Expedition team reviews @Google image of its second dive site. Next stop, the deepest point in the South Sandwich Trench in the Southern Ocean. Somewhere no human has ever been. https://t.co/I5eR8MfrR3 pic.twitter.com/v0nTFmFi5N

His double record-setting dive was part of a mission to explore the uncharted depths of the world’s oceans, collect scientific samples, and look for new species.

Our historic #JavaTrench dive not only made history as the deepest dive in the Indian Ocean, but we captured footage of this incredible potential new #hadal species. Check him out! #fivedeeps pic.twitter.com/Dyqyndt237

“It is almost indescribable how excited all of us are about achieving what we just did,” Vescovo said. “This submarine and its mother ship, along with its extraordinarily talented expedition team, took marine technology to an unprecedented new level by diving—rapidly and repeatedly—into the deepest, harshest area of the ocean.”

According to the Dallas News, at the very bottom of the Challenger Deep Vescovo found a plastic bag and other bits of trash.

Sir David Attenborough, a naturalist and wildlife campaigner, reacted to Vescovo’s unsavory find at the bottom of the Mariana Trench by calling plastic in the sea an “unfolding catastrophe” that we “ignore at our peril.”

In an editorial for The i newspaper, Attenborough wrote, “I have seen for myself the effects of plastic pollution on some of our planet’s most precious species and natural places—an unfolding catastrophe that has been overlooked for too long. But we ignore it at our peril.”

Four Corners of the Earth

With his dives, Vescovo became the first person to have been to the summit of Mount Everest, been to the deepest recessPatrick Lahey, President of Triton Submarineses of the ocean, and skied to both the North and South poles.

“Our goal was to build a submersible capable of repeated dives to any depth with its pedigree and security assured by third-party accreditation,” said Patrick Lahey, President of Triton Submarines.

Lahey said the Limiting Factor “represents a quantum leap in the capabilities of a manned submersible and everyone at Triton is immensely proud to have had the privilege and opportunity to create such a remarkable craft, which was only possible by the unwavering support and vision of Victor Vescovo.”

Vescovo’s dive was one of five made by the team between April 28 and May 5, which included the deepest marine salvage operation ever attempted. On May 3, the Limiting Factor submersible freed and recovered a Five Deeps Expedition scientific lander that had got stuck at the bottom of Challenger Deep in a previous dive.

“It has been a monumental week for ocean exploration; we have broken world records and achieved a number of world firsts. Most importantly we have opened the door to the final frontier—the exploration of the hadal zone and the workings of the deepest parts of the world’s oceans,” said Rob McCallum of EYOS Expeditions, whose company is managing the expedition.

“This vehicle is effectively a reliable elevator that can transport us to any depth, in any ocean. During this expedition we have traversed over 110 vertical kilometers (68 miles) and proved the capabilities of a vehicle that will be a platform for science, film making, and exploration of Earth’s hidden recesses,” McCallum added.

Prior to Vescovo’s monumental dive, only two people had successfully made it to the bottom of Challenger Deep.

“Nearly six decades ago Jacques Piccard and I were the first persons to dive into Challenger Deep, the deepest place in the World Ocean,” said oceanographer Don Walsh, who descended into the Mariana Trench in the 1960s.

“Then in 2012, James Cameron made a solo dive there. And now in 2019, the Five Deeps Expedition’s submersible Limiting Factor was the third,” Walsh said, adding, “And I was there to see it.”

The expedition team notes in the press release that the next stop on the Five Deeps Expedition is the Horizon Deep in the South Pacific Ocean. It is located in the Tonga Trench, considered to be the second-deepest ocean trench in the world.