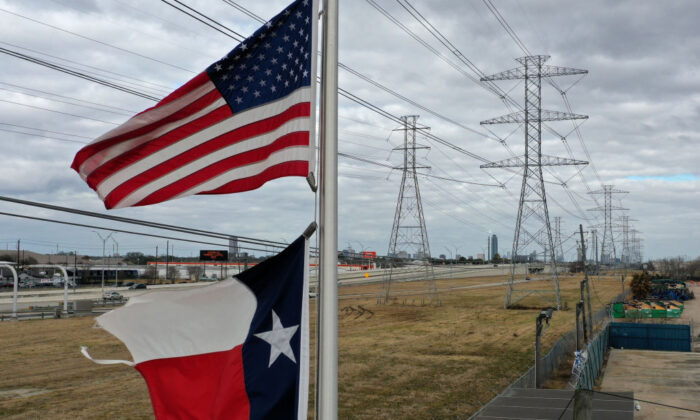 The U.S. and Texas flags fly in front of high voltage transmission towers on in Houston, Texas on Feb. 21, 2021. (Justin Sullivan/Getty Images)
Texas

Texas grid operator, the Electric Reliability Council of Texas (ERCOT), said on Thursday that it has conducted inspections of mandatory winterization efforts and that power plants are prepared for winter weather.

It comes as the state is bracing for colder weather over the weekend and into the New Year, with temperatures set to drop below freezing in some areas.

In a release on Thursday, ERCOT said it completed inspections at 300 electric generation units, representing 85 percent of the megawatt-hours lost during last winter’s storm Uri, and 22 transmission station facilities.

Legislation known as Senate Bill 3 was passed by the Texas House earlier this year which relates to the preparation, prevention, and response to weather emergencies and power outages, and mandates that power plants prepare for extreme weather.

Under the legislation, the amount of administrative and civil penalties for violating weather preparation rules increased to a maximum of $1,000,000 per day per violation.

“Texans can be confident the electric generation fleet and the grid are winterized and ready to provide power,” said Woody Rickerson, vice president of Grid Planning and Weatherization on Thursday. “New regulations require all electric generation and transmission owners to make significant winterization improvements and our inspections confirm they are prepared.”

While ERCOT does not own or operate any electric generation units or electric power lines, it is responsible for balancing electricity supply and demand on an electric grid that serves more than 26 million Texans, roughly 90 percent of the state’s electric demand.

“For example, a generation unit may have needed a windscreen to be compliant, but it was not yet installed on the day of inspection. Many items like this have now been completed since the inspection occurred and all ten units are still operational.  The ten generation units have a total capacity of 2,129 megawatts, representing about 1.7 percent of the total ERCOT generation fleet,” the grid operator said.

Texas is bracing for freezing weather conditions over the New Year, with flash flooding, and sub-zero temperatures expected from the Upper Mississippi Valley to the Northern Rockies, the National Weather Service (NWS) has warned.

Wind chill warnings and advisories already in effect for the far North Central U.S. will remain in place through to Saturday, while a developing storm system in the Plains is set to see another day of severe weather from North Texas to the southern Appalachians on Friday. Meanwhile, flash flooding is likely to be seen in the Middle Mississippi and Ohio/Tennessee River Valleys.

“As the storm system responsible for Friday’s potential severe weather and flash flooding event emerges into the South Central U.S. Saturday morning, the New Year is forecast to start off wintry as measurable snowfall and an icy wintry mix are expected to cause widespread hazardous travel conditions New Year’s Day from the Central Plains to the Great Lakes,” NWS said, adding that up to 8 inches of snowfall are expected.

In November, ERCOT released a report stating the Texas power grid was at risk of failing this winter if the state experiences another storm like it did in February.

February saw an extreme winter storm across the state which resulted in a historic power outage crisis, with a reported more than 4.1 million people left without power.