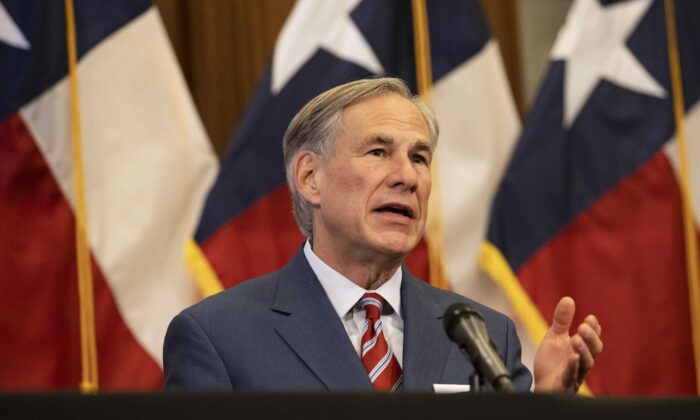 Texas Governor Greg Abbott announces the reopening of more Texas businesses during the COVID-19 pandemic at a press conference at the Texas State Capitol in Austin on May 18, 2020. (Lynda M. Gonzalez/Pool/Getty Images)
Texas

Abbott, a Republican, called for an emergency reform of the Electric Reliability Council of Texas (ERCOT), saying that it hasn’t been “reliable” for “the past 48 hours.”

Separately, the Federal Energy Regulatory Commission and North American Electric Reliability Corporation opened an inquiry into the grid operations “during the extreme winter weather conditions currently being experienced by the Midwest and South-central states,” according to a joint statement from the two agencies. “The severe cold weather over the weekend, and continuing into this week, has contributed to power outages affecting millions of electricity customers throughout the region.”

However, the two federal agencies noted that emphasis has to be placed on restoring power to customers and making sure the electrical grid is reliable.

Abbott released a statement to state lawmakers requesting that reforms are needed at ERCOT.

“The Electric Reliability Council of Texas has been anything but reliable over the past 48 hours,” Abbott said in his statement. “Far too many Texans are without power and heat for their homes as our state faces freezing temperatures and severe winter weather. This is unacceptable.

“Reviewing the preparations and decisions by ERCOT is an emergency item so we can get a full picture of what caused this problem and find long-term solutions,” he added.

Reports have suggested that more than 4.1 million people were left without power in Texas after a winter storm and frigid temperatures descended on the state. The grid operator announced rotating power outages starting Monday morning to manage the electricity demand.

On Tuesday, Oncor, a Texas utility, said it couldn’t rotate the power outages due to “poor grid conditions” caused by the weather.

“As soon as enough generation is available, we will return to a regular cadence of rotating outages with the goal of providing any temporary relief that we can for those who have been without power the longest,” Oncor said in a statement.

“At this time, ERCOT is unable to predict when grid conditions will stabilize, and urge all customers to be prepared for extended outages to continue,” the release states.