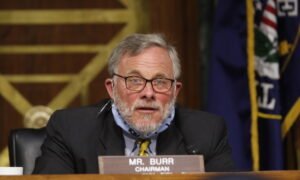 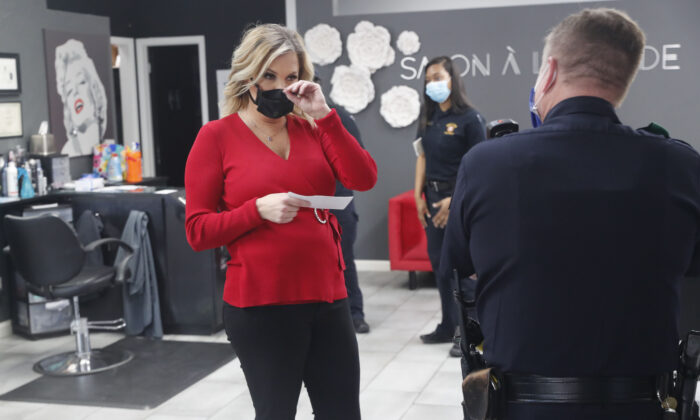 Salon owner Shelley Luther holds a citation and speaks with a Dallas police officer after she was cited for reopening her Salon A la Mode in Dallas, Texas, on April 24, 2020. (LM Otero/AP Photo)
AMERICA

Texas Attorney General Ken Paxton called for officials to immediately release a Dallas salon owner who was jailed for seven days for defying the stay-at-home order by continuing to serve customers.

“Shelley Luther should immediately be released from jail. Locking her up is a misguided abuse of power, especially considering Dallas County released real criminals to ‘protect them from COVID-19,'” Paxton said in a statement on Wednesday.

Paxton sent a letter to a judge in Dallas County, urging the judge to order the release of Luther.

Luther reopened Salon a la Mode on April 24 in defiance of the stay-at-home order issued by Republican Gov. Greg Abbott.

Dallas County Judge Eric Moye told Luther on Tuesday that she would not be sentenced to prison time if she apologized for her “selfish” actions.

“I have to disagree with you, sir, when you say that I’m selfish, because feeding my kids is not selfish. So, sir, if you think the law’s more important than kids getting fed, then please go ahead with your decision. But I am not going to shut the salon,” Luther responded.

The sentence was for contempt of court, Moye said.

“The refusal of the Defendants to cease operation of the Salon, despite the clear and unambiguous language of the Order which instructed them to so do constitutes Criminal Contempt of this Court. The defiance of the Court’s Order was open, flagrant and intentional. The Defendants, although having been given an opportunity to do so, have expressed no contrition, remorse or regret for their contemptuous action,” the sentencing order (pdf) stated.

The sentence appeared to be “another political stunt in Dallas,” Paxton charged.

Abbott also said he disagrees with the sentence, calling it “excessive.”

“As I have made clear through prior announcements, jailing Texans for non-compliance with executive orders should always be the last available option,” he said in a statement on Wednesday.

“Compliance with executive orders during this pandemic is important to ensure public safety; however, surely there are less restrictive means to achieving that goal than jailing a Texas mother.”

Musician Tim Georgeff, Luther’s significant other, said in a Facebook post Wednesday that he was proud of Luther, “who stood up for what so many are too scared to do.”

“She will spend Mother’s Day and her Birthday locked away for defending the rights of all Americans to provide for their families, at the hand of a truly despicable human being. I’ll be outside the jail on those days hoping for someone in this state to have some damn sense,” he said.