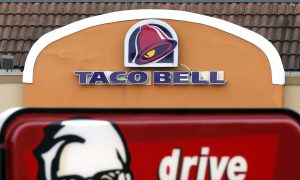 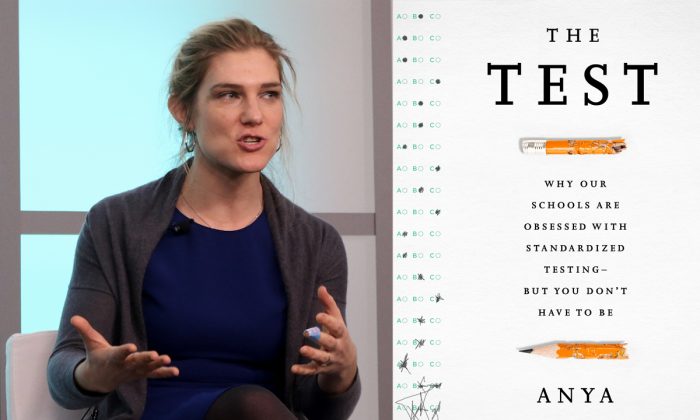 Anya Kamenetz, author of “The Test: Why Our Schools are Obsessed with Standardized Testing—But You Don't Have to Be," and NPR’s lead digital education reporter, spoke on Jan. 8, at the New America Foundation. (Gary Feuerberg/Epoch Times)
Education

WASHINGTON—The measure of students, teachers, schools, and districts increasingly hinge on test scores. Outcomes can be upsetting and dysfunctional—students are held back a grade, teachers denied tenure or even fired, principles removed, schools sanctioned or closed.

Districts either comply with the testing regimen or lose federal education aid dollars.

“No country in the world administers as many standardized tests as the United States or uses them for the same purposes—particularly to grade and punish teachers and schools,” states Anya Kamenetz, author of “The Test: Why Our Schools are Obsessed with Standardized Testing—But You Don’t Have to Be.”

She lays out the problem in the second paragraph: “As an education writer for the past twelve years and as a parent talking to others parents, I’ve seen how high-stakes standardized tests are stunting children’s spirits, adding stress to family life, demoralizing teachers, undermining schools, paralyzing the education debate, and gutting our country’s future competitiveness.”

Students spend … up to 25 percent of the school year engaged in testing and test prep.
— Anya Kamenetz, author, 'The Test'

Kamenetz, who is NPR’s lead digital education reporter, has written a very readable, provocative, nontechnical book, pitched to parents as much as to those in the education profession. “The Test” addresses parental concerns of the “obsession” with which testing has taken hold in our public schools, where nine out of ten students attend, and with the Department of Education in Washington. She builds a strong case for why this obsession is taking the country down the wrong path.

The mom of a three-year-old, Kamenetz says she wrote the book so that other parents would have the tools necessary to build a shield against high-stakes, high-pressure, regimented testing.

A standardized multiple-choice test—most tests are multiple choice and gradable by computer—is limited in what it can measure. Kamenetz cites research that finds the important things such as creative problem solving, critical thinking, oral and written communication skills, motivation and ability to collaborate, can’t be measured by the standardized tests and yet are essential in future success. She notes that tests aligned with the Common Core don’t directly address these attributes either.

On Jan. 8, Kamenetz spoke at the New America Foundation, where she explained that the format of the standardized test, which cost less than $30 per student to administer, doesn’t have much writing or a lot of written equations or measure high quality teaching, and doesn’t need to be graded by a credentialed expert, she said. “You can’t buy that for that kind of money.”

Teaching to the Test

The whole teaching process becomes corrupted by high-stakes tests. Kamenetz quotes from a first-grade teacher who wanted relief from the pressures from her school administration, and so she decided to give them the test results they wanted and then use the remainder of time to teach what was best for her students.

“I taught them to look for loopholes, to eliminate and guess, to find key words, to look for clues,” the teacher said. In short, she taught her first-graders how to manipulate and game the system.

To her horror, she discovered that training her students to do well in the tests was making them “stupid” for real learning.

High-stakes standardized tests demoralize the teachers who have to give “outside authorities the final say on how they should do their jobs,” says Kamenetz. The test scores have more weight in evaluating the students than the teacher who spends hours with the children every day.

Waste of Time and Money

Kamenetz found that students spend about three days taking state tests in each of grades three through ten but up to 25 percent of the school year engaged in testing and test prep. This translates into 585 school days by the time the student graduates high school, or “three and a quarter school years that could have been spent learning instead of being tested.”

Kamenetz acknowledges that teachers and students need “formative feedback” on how students are progressing, but standardized testing is out of the hands of the teacher and not integrated into teaching and learning.

I taught them to look for loopholes, to eliminate and guess, to find key words, to look for clues.
— Anya Kamenetz, author, 'The Test'

The majority of the cost is in the prep materials and logistical and administrative overhead. It’s estimated that schools in the United States will spend $13.1 billion in 2015 on test preparation, tutoring and counseling, according to the book.

Kamenetz laments the loss of time that could have been used “to pursue a passion, a sport … or just be together as a family,” as stressed-out parents subject their kids to “hours of the most boring kind of studying on top of the time they spend in school.”

Kamenetz states that the test regimen is making students hate school. “Especially in the elementary grades, teachers and parents across the country report students throwing up, staying home with stomachaches, locking themselves in the bathroom, crying, having nightmares, and otherwise acting out on test days.”

With the stakes so high, cheating is rampant. Administrators and teachers were caught allegedly tampering with test scores in Atlanta, where “erasing parties” were held to change student scores at 44 schools. Wrong answers were erased and the correct answers filled in.

A GAO report in May 2013 found that in 32 states, test scores were “canceled, invalidated, or nullified as result of cheating,” during two school years of 2011 and 2012, wrote Kamenetz.

On paper, the Common Core looks to address many of the issues of state standardized testing raised above. Common Core is a state initiative led by the National Governors Association and nonprofit, Achieve, Inc. in 2010, with a lot of money from the Gates Foundation. It set standards emphasizing critical thinking and logical reasoning applied to English and math. In the hope of obtaining Race to the Top money, forty-eight states adopted the standards.

Six states have abandoned the program due to mounting criticisms. Right wing groups are especially harsh in their attack of the Common Core, but others, including teachers unions, oppose it as well.

For political reasons, the federal government doesn’t formally endorse the Common Core, but monetary awards from the Department of Education makes it clear that they want these test score standards to measure student success, school performance, and teacher evaluation.

Kamenetz states that Common Core tests have yet to demonstrate that they are predictive of long-term student success. The tests are indisputably harder than the ones they are replacing, but that doesn’t mean that they are a better tool for evaluating students, teachers and schools, she says.

There is no evidence that the Common Core tests will prepare more students to succeed in college and still correct for the old pitfalls of high-stakes testing. Kamenetz expects more of the same. “More teaching to the test, more cheating, more closing of schools and firing of teachers,” she writes.