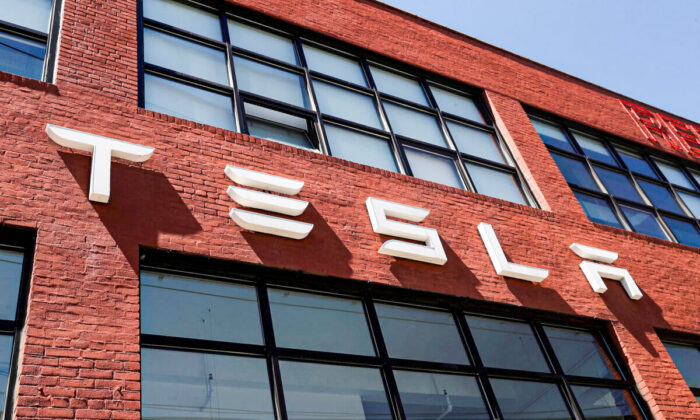 The Tesla logo is seen outside a dealership in the Brooklyn borough of New York on April 26, 2021. (Shannon Stapleton/Reuters)
Analysis

Tesla and CCP Battling for Control of Users’ Big Data

U.S. electric vehicle giant Tesla Inc., which has had great strides in the Chinese market, is under mounting data scrutiny from the Chinese Communist Party (CCP) despite its engagement with regulators.

Tesla founder Elon Musk on Nov. 2 posted on Twitter a poem titled “Humankind,” followed by a 4-line original quote from an ancient poem well-known to Chinese readers, which can be roughly translated in English as the following:

The bean stems are burning hot,
While the seeds are weeping in the boiling pot.
“As outgrowths from the same root,” the seeds protest,
“Why thou leave us in such a disastrous rest?”

The piece carries an insinuating criticism that brutality should be avoided among those with close ties.

Legend has it that its author, Cao Zhi, who was one of the brothers of the king of the Wei State, Cao Pi, in Chinese history saved his own life with the piece. At the palace, the king, who envied his brother’s talent and deemed him as a threat, ordered him to create a public poem before he could walk seven paces. If he failed, the king could order his men to kill him. The cornered but quick-witted poet succeeded with this poem and survived the crisis.

The Tesla CEO did not provide any interpretation for the tweet, which stirred up thousands of interpretations. Currently, his company in China faces huge challenges posed by CCP regulators.

The Yoke of Beijing’s Data Scrutiny

Tesla has blossomed in China’s electric vehicle market over the last few years, with the country becoming its second largest single market. However, Hong Kong finance columnist Alexander Liao sees trouble for the company in China.

“The staggering data-gathering capability of Tesla electric cars has always been regarded as a threat to the CCP regime,” said Liao.

Seeing data as a top concern in its AI strategy, Beijing is seeking dominance of the resource, according to Liao. The contest for data control might stay the entire course of Tesla’s development in China because the automaker is unlikely to abandon its core advantages in data collection and application.

In mid-June, the CCP’s rubber-stamp legislature passed a data security law to tighten its grip within the domain. The law went into effect on Sept. 1.

Yet, Liao suspects that the CCP’s true intention is not meant for protecting privacy but for ensuring the communist regime’s data dominance, blocking all other institutions or individuals from entering the field.

Tesla successfully gained strong support from the communist regime at the start of its business in China.

In 2019, Tesla began construction of its Shanghai plant. It received from several Chinese banks more than more than $2.3 billion in loans at low interest rates only available to China’s best state-owned enterprises. The plant delivered its first Model 3 vehicles in late 2019. Despite the COVID-19 virus outbreak, its production remained unaffected. By the end of 2019, Tesla’s stock price began to enter the fast lane.

According to a January 2020 article on China’s news portal Sina, China imported Tesla in hopes of helping forge a complete supply chain for the electric vehicle industry in China. The paper noted the weakest link in the industry lies in complete vehicle manufacturing, expecting Tesla to play its role in that field, as Apple had done to China’s cellphone industry.

Surprisingly, the honeymoon between Tesla and Beijing did not last long, with the U.S. carmaker leaving under suspicion of spying.

Users’ big data has been viewed as a new strategic resource amid fierce U.S.-China tensions in the high-tech sector.

An article published on Chinese news portal NetEase in March suspected Tesla electric vehicles of being “data monsters” that gather all sorts of information.

The story accuses a Tesla car of being a mobile smart spying terminal system that collects and transfers data in real time—including information that its cameras scan from a Chinese military vehicle it encounters—back to its U.S.-based database. The report argues it is a potential form of intelligence collection.

Even worse, the article claims, a Tesla vehicle could be used to create an apparent accident for assassination purpose if Musk’s SpaceX Starlink program comes to fruition, which then could be connected to its terminal and control it. At least, the story assumes, access to Tesla’s database alone may easily reveal the distribution and precise locations of a country’s core institutions, which could be directly destroyed in the event of war.

“All countries need to be wary [of Tesla],” the paper concludes.

According to Tesla China, each of its electric vehicles is equipped with eight cameras and 12 ultrasonic sensors as well as a 360-degree vision to power its Autopilot system.

There have been signs that at least some Chinese authorities have ordered to block Tesla vehicles from entering military or other sensitive facilities, citing security concerns, according to China’s state media reports. The restrictions involve military and governmental institutions, key state-owned enterprises, as well as residential communities where relevant personnel and their families live. In some cases, restriction orders were only verbal.

Officials of at least two government agencies in Beijing and Shanghai were instructed verbally by supervisors not to park their Tesla electric cars at work, insiders who declined to be named told Reuters in May.

Tesla Reluctant to Surrender Its Data

Tesla denied all accusations against it regarding alleged spying.

“There’s a very strong incentive for us to be very confidential with any information,” Musk told a prominent Chinese forum during a virtual discussion on March 20. “If Tesla used cars to spy in China or anywhere, we would get shut down.”

In late October, Tesla announced it had completed construction of its China-based data center and that the data collected in the country will be stored within the territory.

Still, the CCP does not rest assured, viewing the center as a risk, afraid that its data might be transferred to Tesla’s home country or leaked by design or by accident because it is not kept at a data terminal the CCP controls, Liao said.

Tesla’s move is reminiscent of Apple Inc., which declared construction of an iCloud data center in China in July 2017, one month after China’s cybersecurity law came into effect. Later, Apple turned over its iCloud to a Chinese state-owned company Guizhou-Cloud Big Data to operate.

However, Tesla didn’t follow Apple to partner with a state-owned firm. Instead, the automaker began to hire engineers on data platforms to operate a center of its own.

For Tesla, big data and AI computing represent one of its core advantages to back its Autopilot, Liao told The Epoch Times. The vehicle giant would be hesitant to give it up to the CCP.

“Beijing’s next move might be to pressure Tesla to agree to separate data control from vehicle manufacture and sales,” Liao said, “say, create a separate joint company to manage its data together with a CCP-designated partner.”

However, Tesla, viewing its vehicles as a driving AI system, may have no interest in such cooperation.

Musk said autopilot functions heavily depend on data from different scenarios, according to state news portal Tencent. So far, FSD (fully self-driving) is best used in California because the data collected during its initial research and development stage came from the state. Likewise, Tesla can’t go without data from China if it wishes to get its vehicles more adapted to China’s road conditions and local driving habits.

Tesla’s Autopilot feature requires a sea of data to train its model. In 2017, the carmaker requested owners to authorize the manufacturer to collect videos taken by Autopilot cameras when it released an update. At that time, most car owners consented to Tesla collecting their data.

With the popularity of Model 3 and Model Y and the rollout of FSD, Tesla has gained access to massive amounts of owner-driven data to train its visual neural network, which enables it to cover more scenarios and continuously optimize its algorithms, thus making its unique autonomous driving solutions possible.

Additionally, Tesla cannot hand over its data to Beijing, if only for the protection of its customers’ privacy.

China the Most Data-Restrictive Country in the World: Think Tank

The CCP’s dominance of big data has raised global concern.

“China is the most data-restrictive country in the world,” the Washington-based Information Technology and Innovation Foundation (ITIF), a U.S. nonprofit public policy think tank, said in a July report.

The document provided a list of data localization measures by country, covering 30 pages, five pages of which went to China alone, the worst of all the nations involved.

It wrote that authoritarian governments like China see physical access to data centers as a “critical enabler of surveillance and political control.” The ability to target individuals and impact their privacy and freedom of expression, or political oppression, is made possible once information is under government control, the report noted.

“Big data is a must-have for the CCP,” Taiwanese economist Chang Ching-His told The Epoch Times. “It’ll be extremely dangerous if companies cannot handle it properly themselves. The CCP could take it away easily.”

Beijing is bent on keeping data firmly in its own hands, sparing neither domestic tech firms like Tencent, Douyin, Alibaba, Baidu, nor foreign companies like Google, Tesla, and Apple Inc.

In July, China’s regulators targeted ride-hailing giant Didi just days after its debut on the New York Stock Exchange. A key concern for Chinese authorities was that Didi might offer its large body of data to American regulators.

Three months earlier, Chinese regulators urged 13 large and powerful private firms, including Tencent, Jingdong, and ByteDance, to apply for licenses for financial holding companies for their financial platforms. This way, authorities could channel their payment data into the scope of surveillance.

A new war over big data appears to be underway as nations get into more specifics about the role of AI, future tech competition, and their relationship—and Musk may have smelled the gunpowder.

Wendy Yue contributed to this report.