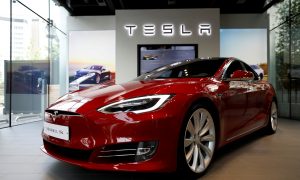 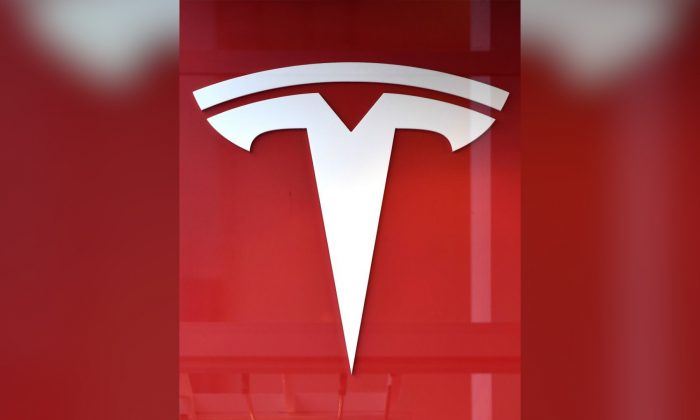 This photo shows the logo if US car maker Tesla in Brussels on February 8, 2018 - A day after launching one of its cars into space, Tesla moved on February 7 to ease concerns on earth over production delays for its Model 3, the key to future growth for the star electric carmaker. (Emmanuel DUNAND/AFP/Getty Images)
Companies

WASHINGTON—Tesla Inc. has asked the Trump administration to exempt the Chinese-made car computer “brain” of its new Model 3 sedan from 25 percent tariffs imposed in August, saying they threaten the electric carmaker’s bottom line.

“Increased tariffs on this particular part cause economic harm to Tesla, through the increase of costs and impact to profitability,” the company said in a previously unreported request for tariff relief from the government.

Led by tech billionaire Elon Musk, Tesla is among a host of companies, including No. 1 U.S. automaker General Motors Co, to warn of growing costs related to the tariff war between the world’s two largest economies.

The Chinese-made computer, used by Tesla in the car assembled in Fremont, California, was among $16 billion in imports that were hit with 25 percent tariffs by the United States Trade Representative’s Office in 2018.

In a redacted request posted on a government website by the USTR on Dec. 17, Tesla did not identify the supplier of the computer. But it said it had been unable to find another manufacturer “with the required specifications, at the volume requested and under the timelines necessary for Tesla’s continued growth.”

Tesla, which called the Model 3’s computer “the brain of the vehicle,” added that “choosing any other supplier would have delayed the (Model 3) program by 18 months with clean room setup, line validation, and staff training.”

Using a new supplier “substantially increases the risk of poor part quality that could lead overall vehicle quality issues that would impact the safety of our vehicles and the consumer acceptance of the final product,” Tesla added in its request for tariff relief.

Tesla declined to comment on the tariff matter on Jan. 4. But it has been aggressively cutting costs as it works to meet production goals for the Model 3, which has become a top-selling luxury sedan on the U.S. market alongside the larger Model S.

Other automakers have sought similar exemptions but have not yet received an answer.

GM in late July sought an exemption to a 25 percent U.S. tariff on its Chinese-made Buick Envision sport utility vehicle. The Envision accounted for nearly 15 percent of U.S. Buick sales last year, even as sales fell by 27 percent.