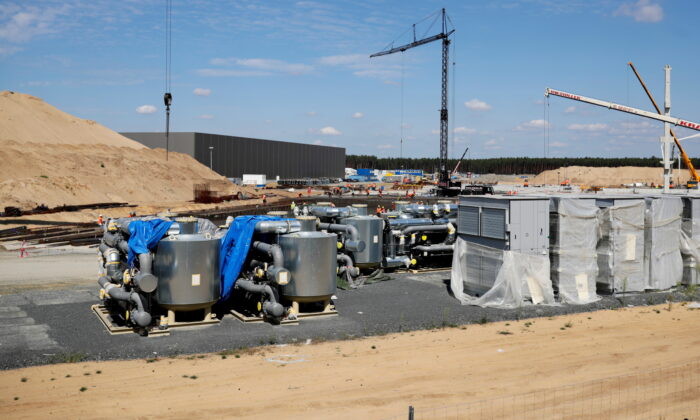 A view shows the construction site of the future Tesla Gigafactory in Gruenheide near Berlin, Germany, on Aug.12, 2021. (Hannibal Hanschke/Reuters)
Business & Economy

BERLIN—Tesla, well-versed in German bureaucracy as it tries to build a huge factory near Berlin, is seeking a waiver from COVID-19 rules on mass gatherings to host up to 9,000 people at a “Giga-Fest” to showcase its plans.

The electric vehicle maker, which began construction in the town of Grunheide in December 2019 but is still awaiting final approval for its site, announced in August it would hold an event on Oct. 9 to let locals see the factory in construction.

Its outspoken boss, Elon Musk, tweeted earlier this month he would attend.

Local authorities told Reuters the company had applied for permission to have 9,000 people on-site, beyond pandemic rules which limit such gatherings to 5,000.

“The documents available suggest that the application will be approved,” a spokesperson for the local authorities said, confirming an earlier report by newspaper B.Z.

To host the event, Tesla must also prove it will not damage the land or release toxic substances into the groundwater—a topic that has held up construction on the grounds for months.

It is also expected the firm will meet this requirement, the local authorities spokesperson said.

Tesla’s chosen site borders a water protection area, and environmental groups have expressed concern the factory could contaminate and over-use its groundwater sources.

Musk has said the factory will use less water than other industrial projects in the region, and that Tesla’s plans include measures such as a water recycling facility to ensure it does not strip locals of their drinking water.

A website set up to register for the event says the day will involve a “behind the scenes” factory tour and the opportunity to ride in a Model Y, the car that will be produced on-site if the factory is approved.