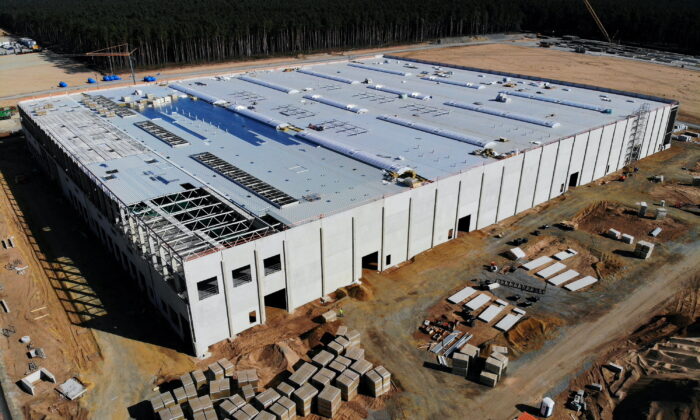 The construction site of the future Tesla Gigafactory is seen in Gruenheide near Berlin, Germany, on Sept. 19, 2020. (Hannibal Hanschke/Reuters)
Companies

Tesla Inc. is yet to submit documents related to its upcoming gigafactory in Grünheide, Berlin, as per local publication rbb24, which cited Brandenburg’s Environment Minister Axel Vogel.

The Austin, Texas-based electric vehicle maker does not have a final greenlight from the local authorities for the official start of production at the Giga Berlin as all requested documents have not been submitted.

“In order to be able to implement this in a legally secure manner, it is also necessary that appropriate reports are available, and it is regrettable that not all reports are available in this quality yet,” the report noted in German, citing Brandenburg Environment Minister Axel Vogel.

No further details were provided by the minister on the type of documents that are pending.

The third round of public consultation was open to those who expressed an objection in previous rounds but were not satisfied with the response from Tesla or the environmental ministry.

Musk had earlier said Tesla could start rolling off cars from the production lines at its new Giga Berlin in November or December though achieving volume production at the Berlin factory would take much longer than it took to build the factory.

Musk has previously blamed German bureaucracy for the delay in starting production at the Berlin Gigafactory.

Musk announced the plans to build the Berlin gigafactory in 2019 but construction began last year. The factory could eventually clock a 500,000 annual electric vehicle capacity.