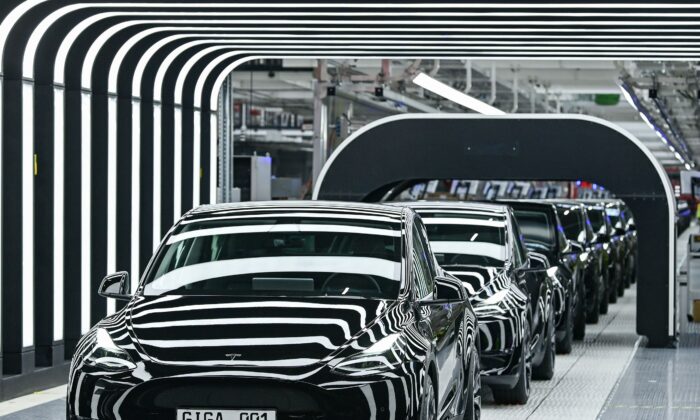 A line of electric vehicles of the model Y during the start of the production at Tesla's "Gigafactory" in Gruenheide, southeast of Berlin on March 22, 2022. (Patrick Pleul/Pool/AFP via Getty Images)
Companies

Elon Musk’s Tesla has been given its own dedicated lane at the U.S.–Mexico border crossing near Laredo, Texas, to help speed up and streamline the process for suppliers traveling through the crossing, according to reports.

The electric vehicle maker moved its headquarters from Palo Alto, California, to Austin, Texas, last year and has since struck a deal with one of Mexico’s most “pro-business states” to get its own lane at the Colombia Solidarity checkpoint for its suppliers, according to Bloomberg.

“It was a simple incentive,” Ivan Rivas, the economy minister of Nuevo León, a state in the northeast region of Mexico, told the news outlet. “What we want is a crossing that’s much more expedited and efficient. And maybe there will be a lane for other companies in the future like there is for Tesla.”

Rivas, who did not negotiate the deal, did not provide any further information about the alleged exclusive lane.

He added that Nuevo León, which borders the United States for 10 miles, is becoming an “electro-mobility hub,” and that he expects the EV industry to contribute to between 5 percent and 7 percent of investment in the state this year.

A spokesperson for the U.S. Customs and Border Protection said the agency has not given Tesla such an exemption, so the reported exclusive lane may possibly be operating one way for now.

“For northbound commercial trucks at the Colombia-Solidarity Bridge, currently there are only the regular cargo lanes and the Free and Secure Trade (FAST) lane, which is for the exclusive use of companies that are enrolled in the CBP-Trade Partnership against Terrorism (C-TPAT) program,” Rick Pauza, public affairs officer for the agency, said in a statement to TechCrunch. “There is no separate, dedicated lane for Tesla or any specific company.”

The so-called exclusive lane for Tesla vehicles comes as supply chain issues continue to plague businesses, and have been worsened by China’s renewed COVID-19 lockdowns along with Russia’s war in Ukraine.

A recent study by QIMA, a global quality control and compliance service provider, found that two-thirds of global businesses with international supply chains anticipate that the current disruptions will continue or worsen by the end of 2022.

Treasury Secretary Janet Yellen said in remarks during a visit to Seoul this week that she is pushing for increased trade ties with the United States and its trusted trading partners to improve supply chain resilience.

Meanwhile, a Delaware judge this week ruled that Musk’s trial with Twitter will take place in October 2022, four months earlier than the February 2023 trial date the businessman had requested and closer to the September 2022 trial date requested by Twitter.

Musk is being sued by Twitter after walking away from his $44 billion acquisition of the social media platform following a dispute over the number of automated bots and fake accounts on the platform. Twitter is suing to force him to complete the deal.