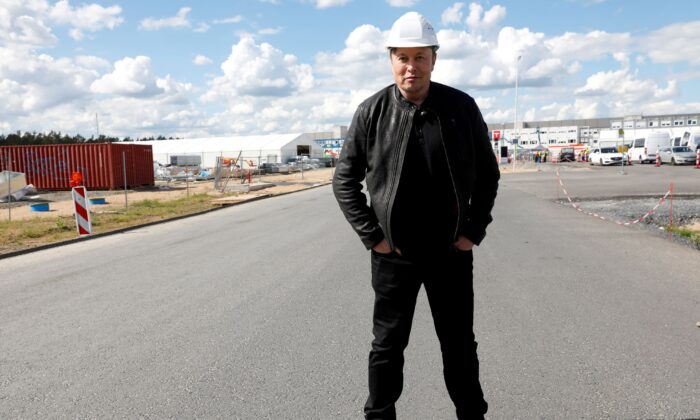 SpaceX founder and Tesla CEO Elon Musk looks on as he visits the construction site of Tesla's gigafactory in Gruenheide, near Berlin, Germany, on May 17, 2021. (Michele Tantussi/Reuters)
Companies

BERLIN—Elon Musk will visit Tesla’s factory in Berlin in mid-February, the chief executive said on Twitter Tuesday, following speculation on Twitter that he would be in Germany this month.

“I obv can’t comment on every rumor, but this isn’t true. Am headed to Berlin mid Feb, not this week,” Musk said in a tweet in response to an article by website Drive Tesla CA which cited a tweet claiming he was visiting Berlin on Jan. 16.

Musk added in a separate tweet that rumors around his travel plans online were becoming a “security issue,” in response to an apology from the account owner who first posted the wrong travel date, Sawyer Merritt.

Musk said last year he expected the Berlin factory to have received its license to begin mass production of its Model Y cars by December, but bureaucratic hurdles and an ongoing court case over the factory’s water use have delayed the process.

A first hearing in the court case will take place on Feb. 11, although regional finance minister Joerg Steinbach told German newspaper Tagesspiegel earlier this month that the license to begin production could come before the case was resolved.