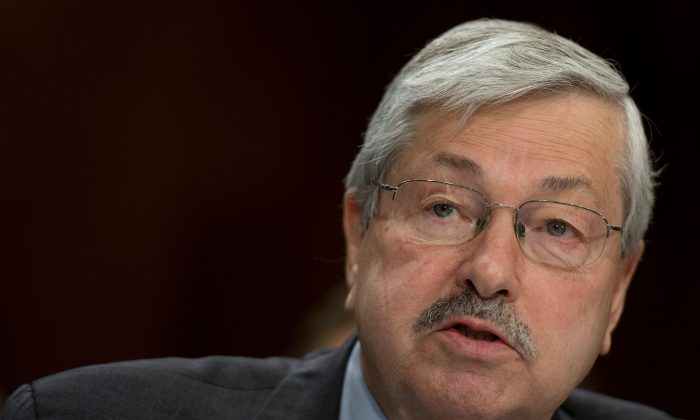 Former Iowa governor Terry Branstad testifies before the Senate Foreign Relations Committee on his nomination to be ambassador to China, on Capitol Hil,l in Washington on May 2, 2017. (Jim Watson/AFP/Getty Images)
China

Terry Branstad Confirmed as US Ambassador to China

Branstad has also long been acquainted with Chinese leader Xi Jinping, having hosted Xi in Iowa when he was still a young agricultural official from northern China in 1985. They kept in contact over the years, and Xi has called Branstad an “old friend.”

But Branstad told lawmakers at his confirmation hearing on May 2 that “as an old friend, I’d tell [Xi Jinping] where he’s falling short.” Branstad said that the United States and China should be partners instead of adversaries, but that the Chinese regime needs to play by the rules.

Branstad also assured the Senate that he would be firm with the Chinese regime on issues from North Korea to trade disputes to human rights. He added that he would welcome without hesitation Chinese activists and dissidents to the U.S. Embassy in Beijing.

The confirmation vote was 82-13, with dissenting votes coming from Democrats.