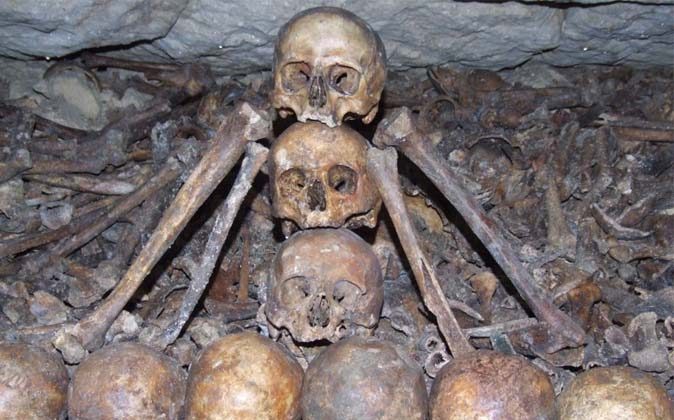 Bones in the Paris catacombs. (Jjmusgrove via Compfight cc*)
Beyond Science

Mounds of human bones are found in the Parisian catacombs. Beneath Paris stretches a network of tunnels and rooms as vast as the city’s streets, most of which has not been explored.

It is rumored that the Gates of Hell are found in this morbid maze.

When the city’s cemeteries became too full in the 17th century, millions of bodies were piled up in the catacombs. Little more than a mile of the catacombs is open to visitors; within this section is an ossuary (a receptacle for bones) over which is the inscription “Arrête, c’est ici l’empire de la mort!” (Stop! This is the empire of death!)

Though most of the catacombs are closed to the public, some rebels known as “cataphiles” find their way in to explore. A video camera found in part of the catacombs may document the terrifying last moments of its owner, whose identity and fate remain a mystery.

A video camera found in part of the catacombs may document the terrifying last moments of its owner, whose identity and fate remain a mystery.

The camera’s footage shows the videographer’s exploration—he stops to film bones arranged into arrows that point down the narrow passageways. He films rooms full of human bones piled high, and of unknown depth.

He films some signs painted on the walls. One is a haunting human figure painted in white with arms and legs spread.

“After about 40 minutes of the point-of-view shots … the person begins to walk faster and faster. Then he begins to run. We hear his breathing get louder and louder,” described filmmaker Francis Freedland in an interview with Syfy’s “Ghost Hunters” (see video below).

He’s frightened. Sometimes he pauses as though trying to decide which way to run. He runs faster and deeper into the catacombs before finally dropping the camera and running on without a thought of retrieving it.

He’s frightened. Sometimes he pauses as though trying to decide which way to run. He runs faster and deeper into the catacombs before finally dropping the camera and running on without a thought of retrieving it. As the camera hits the wet floor of the catacombs, the videographer’s feet are seen and heard running further into the tunnel. The camera keeps rolling until it’s battery dies.

Lazar Kunstmann, a cataphile, told Freedland it seems the videographer was unfamiliar with the catacombs. Kunstmann probably knows the dark and dangerous city below the city better than anyone, Freedland said. The two, accompanied by a few other cataphiles, trekked 12 hours through the catacombs trying to find any further clues about the videographer, whom they say may have become irretrievably lost and died in the city’s depths.

Devil’s Hoofprints Spotted in the Snow?

Or, did he find the legendary Gate to Hell? Was he haunted by its denizens, or did he simply panic at being alone in the maze full of human remains?

The mystery remains, as Kunstmann and Freedland were unable to discover anything of the man whose video now haunts us.