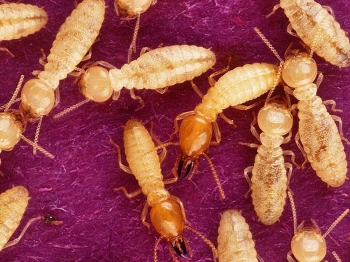 Termites ate around $200,000 worth of Indian rupees. (Wikimedia Commons)
World

By Alex Johnston
Print
Termites, known for their ability to chew through wood and paper, may have done their most unusual damage yet: 10 million Indian rupees ($200,000).

"It's a matter of investigation how termites attacked bundles of currency notes stacked in a steel chest,” police officer Navneet Rana told The Associated Press.

The notes were kept in a currency chest at a State Bank of India branch in Barabanki district, Uttar Pradesh, says the U.K.’s Daily Telegraph. Officials said they were “horrified” when they saw the destruction wrought by the diminutive pests.

Police officers said that they did not rule out “foul play” regarding the incident, the newspaper said.

"I am not sure where the termites came from, but as you can see this building is quite old. Anti-termite treatment is now underway," branch manager Sunil Dwivedi told the paper.

An accounts officer with the bank said that the termite problem is so bad that the branch will probably have to move.

“We have been trying our best to keep currency notes safe but the termite problem here is so enormous that it would be better to move the branch elsewhere,” Dwivedi told India’s Daily News and Analysis.