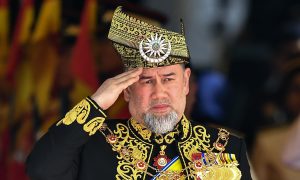 In early October, conservative women from across the country gathered in Washington D.C. for a summit to voice support for President Donald Trump’s America First agenda.

One of those women was former Miss Wisconsin USA winner Melissa Young, who was at the event for a very special reason.

Just a day earlier, Young, who is terminally ill, was getting a blood transfusion in Wisconsin. But she insisted on traveling to the summit.

“I promised President Trump that until my last breath, I would speak up about what kind of man he is,” Young said.

“He is the most wonderful man I’ve ever met.”

Young, who was crowned Miss Wisconsin and Miss Congeniality in 2005, suffers from autonomic failure syndrome, an incurable disease. She made headlines in March 2016 after she thanked then-candidate Trump at a rally for his support while she was battling the illness.

“When he found out I was ill—this was years before he announced he was running for president—he was sending me letters to the hospital, telling me … to be brave, that I’m the bravest woman he knows, and to keep fighting,” said Young.

“And what he didn’t know is that those letters really saved me, they saved my life because there was someone on the outside saying you’ve got this.”

Speechless!!! Thank you so much Mr. Trump.

Dear Mr. Trump,As my body is getting weaker, I am unsettled by the fact that I have never been able to directly thank…

Young previously told The Pageant Planet that her illness was caused by medical negligence when she was pregnant with her first and only child, Jack.

The disease slowly shuts down the part of the brain that controls vital functions such as heart rate, digestion, and body temperature until the victim dies.

She said Trump, who owned the pageant until 2015, also promised to look after Jack, who is now 10-years-old.

“My illness was caused by doctors and medical negligence,” Young said. “And when he found out that I chose forgiveness instead of a payout for that, he said, I will take care of your boy and I’ll make sure that he’s okay.”

Jack now has a full-ride to college thanks to Trump and his organizations, Young said at the rally in 2016.

The former beauty queen said she felt compelled to tell her story at the rally after seeing the media’s portrayal of Trump during the campaign.

“I happen to be a woman who was in his beauty pageant, and I happen to have a son who is Mexican-American that he took very great care of.”

She said Trump could have used her story to defend himself, but didn’t to protect her privacy.

“And so I believe it was my job at that time to get out of the hospital and thank him,” she said.

“I think stories like mine, stories of the heart, human interest stories [are the ones] that people don’t hear about.”

Young has since been fulfilling her promise to share her story. The mother said she is also driven to do this for the sake of her 10-year-old.

“[It’s] a message for my son Jack, that whatever it takes, if you have to do the army crawl, you get up and show gratitude, and you speak up for what’s right.

“And this is right.”