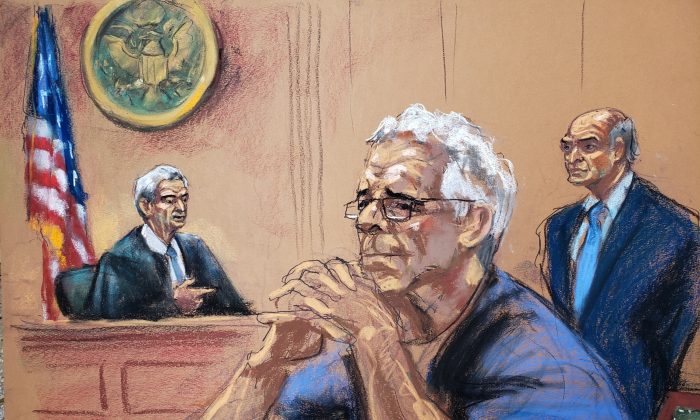 Jeffrey Epstein looks on near his lawyer, Martin Weinberg, and Judge Richard Berman during a status hearing in his sex trafficking case, in this court sketch in New York on July 31, 2019. (REUTERS/Jane Rosenberg)
Crime and Incidents

Tentative Trial Date in Epstein Case Set for Next Year

Berman set the date, which he said could change in the coming months, for June 8, 2020. Epstein’s counsel, meanwhile, argued for a date around Labor Day, in September 2020.

During brief arguments, Assistant U.S. Attorney Alison Moe explained the need for a speedy trial and that there is a “public interest in bringing this case to trial as swiftly as possible.” She pushed for it to start sometime in June 2020.

Berman said the trial is expected to last between four and six weeks.

Epstein’s lawyers argued they needed at least 13 months to review the more than “1 million pages of discovery” to prepare for the trial, which they described as “complex” and “not an ordinary case.”

During the hearing, which lasted around 20 minutes, Epstein, talking to his lawyers and going through his notes, appeared to act differently than his previous hearing, in which he appeared disheveled and interacted with no one.

Appearing more awake than his previous court appearance and with no visible injuries, Epstein sat in court donning a navy prison uniform. As soon as he entered the courtroom, he whispered with his attorney, who sat to his left. He was unchained and appeared physically fine.

It marked the first court appearance since Epstein was reportedly found injured and semi-conscious in his prison cell on July 24 with marks on his neck. It remains unclear whether the incident was a suicide attempt or if he was assaulted by another inmate.

Authorities haven’t disclosed any new information regarding the incident, and the reported injuries weren’t brought up in court.

Epstein is currently being held at the Metropolitan Correctional Center while he awaits trial, after he was denied bail by Berman at a hearing on July 18. His lawyers have since appealed the judge’s decision.

Berman also set a date for oral arguments, which he said would take place in October.

Court documents allege that Epstein sexually exploited and abused dozens of minor girls at his homes in Manhattan and in Palm Beach, Florida, among other locations.

Weeks ago, Berman, in rejecting Epstein’s proposed bail package, described it as “irretrievably inadequate.” Epstein had requested to stay at his Manhattan mansion under house arrest and with armed guards paid out of his pocket.

Prosecutors are also investigating additional suspects linked to the financier, according to a July 25 court filing.

The revelation came in a government protective order that seeks to keep “certain documents and materials” under wraps, so as not to “impede if prematurely disclosed, the Government’s ongoing investigation of uncharged individuals,” the document stated.

The filing, which didn’t reveal names of the aforementioned individuals, had also been signed by Epstein’s lawyer, Martin Weinberg.

The government said that while it does intend to produce some of the documents in Epstein’s case, it “would risk prejudicial pretrial publicity if publicly disseminated,” adding that they aren’t authorized to be disclosed to the public beyond “that which is necessary.”