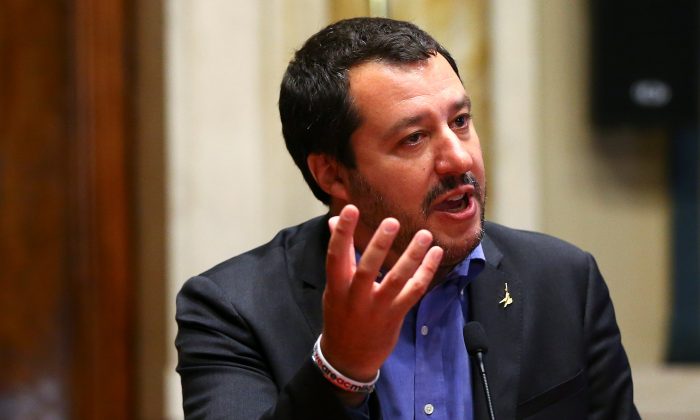 League party leader Matteo Salvini speaks at the media after a round of consultations with Italy's newly appointed prime minister Giuseppe Conte at the Lower House in Rome, Italy, May 24, 2018. (Reuters/Tony Gentile)
Europe

ROME—Italy’s Deputy Prime Minister Matteo Salvini on July 27 called for work to continue on an ambitious Franco-Italian rail link, putting himself at odds with his coalition partners, who have denounced the costly project.

Salvini’s League and the Five-Star Movement laid aside their rivalry in June to forge a government alliance, and although they have pledged to govern together for a full five-year term, some cracks have started to emerge.

One of the fault lines focuses on the fate of a 270-km (167-mile) high-speed line, known as the TAV, which is due to link the French city of Lyon with Italy’s Turin, at an estimated cost of 26 billion euros ($30.2 billion).

Work has begun on the project, but infrastructure minister Danilo Toninelli, a Five-Star member, warned last week that no one should “dare to sign off” on advancing the line. “We would consider that a hostile act,” he said.

Two Italian newspapers said on July 27 that Prime Minister Giuseppe Conte had agreed with Five-Star that the contested link, which would cut through the heart of the Alps, should be scrapped.

Conte’s office denied the reports, saying that the government was simply fulfilling a promise to review the cost-benefits of the line, which is designed to boost trade between France and Italy, as well as between other EU states.

Salvini confirmed on Radio24 that the review was underway.

“If, by chance, from an official analysis it emerges that we don’t need it, does it cost more to block it than not to pursue it?” Salvini said. “From my point of view, it’s better to go forward than backwards.”

Five-Star Promises
Under the terms of the 2016 TAV deal, the European Union agreed to pay 40 percent of the bill, Italy 35 percent, and France 25 percent. Italy has so far spent 400 million euros on preparatory work, but could face large penalties from both Paris and Brussels if it backs out of the project.

A government source said Rome was in contact with France to discuss the enterprise.

Maurizio Martina, the leader of the opposition center-left Democratic Party, estimated that Italy could be hit with 2 billion euros of charges and be shut out of further EU infrastructure financing for up to five years as punishment.

“The entire nation will pay for the folly of this government to block the Turin-Lyon line,” he wrote on Twitter on July 27.

Five-Star had campaigned ahead of March elections to scrap three major industrial concerns—the TAV, a transnational pipeline called the TAP, and a huge, polluting steel plant in southern Italy operated by Ilva, which is set to be sold to ArcelorMittal.

Meanwhile, Five-Star leader Luigi Di Maio, who is also an industry minister, is reviewing the legality of the Ilva sale contract. At the same time, he is pushing ArcelorMittal to improve its offer, indicating that he is open to the steel plant staying on line.