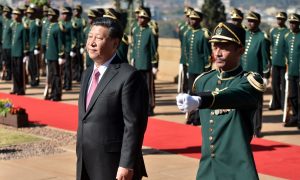 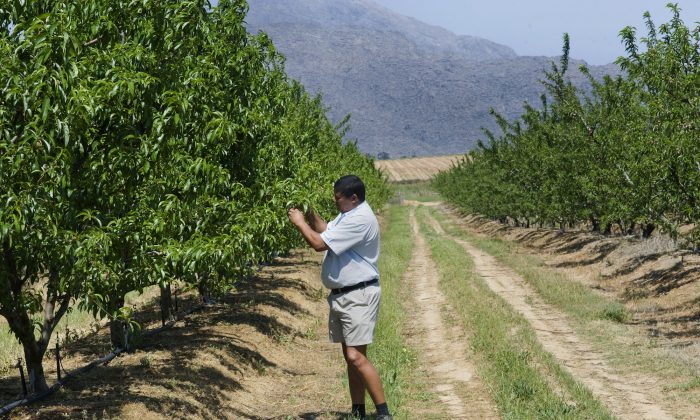 Trevor Abrahams checks on nectarine trees on his farm on Oct. 10, 2011, close to Ceres, South Africa. Abrahams, an emerging farmer, has received mentorship, support, and funding from an established local farmer, to get to the point of having a productive fruit farm. (Rodger Bosch/AFP/Getty Images)
Africa

Some white farmers have had role in land-sharing initiatives, development of black farmers for decades
By Darren Taylor
biggersmaller
Print

JOHANNESBURG —South Africa’s parliament will soon begin debate on a measure designed to put more prime farmland in black hands, in a renewed bid to change the racial imbalance in land ownership that’s a legacy of colonial rule.

The bill, in its current form, will allow the state to expropriate land owned by whites without compensating them, but only under very specific conditions.

The ruling African National Congress (ANC) has repeatedly emphasized that it doesn’t intend to begin a mass seizure of white-owned farms, but South Africa’s estimated 30,000 white commercial farmers remain anxious about the future.

Many argue that, in the absence of an effective, state-driven land reform program, they’ve been involved in land-sharing initiatives and the development of black farmers for decades, without any government support or recognition.

One of them is Jannie de Villiers, who’s at the helm of Grain South Africa, one of the country’s most powerful agricultural organizations. Its members, who are mostly white farmers, produce the bulk of the maize that feeds the majority of the nation’s 56 million people.

His English rolled gutturally over his tongue recently as he addressed an agricultural meeting in northern Limpopo province.

De Villiers explained that his group was helping 8,000 black subsistence farmers who weren’t getting any support from the state. The smallholders are too poor to buy land, so most work tiny, leased farms. Because they don’t own land, they can’t use it as surety to get the funds they need to expand their enterprises. Most, therefore, remain mired in poverty.

While De Villiers and his partners step in to give black farmers seeds and fertilizers, agricultural technicians map their lands and analyze soil samples to establish what will grow best on their farms. Experienced white farmers mentor their less-privileged black compatriots to give them the skills necessary to boost their yields.

White Afrikaner farmers aren’t known for sensitivity, but De Villiers cried as he explained how his life had also been transformed since he started helping the small farmers.

“I asked one of them, a very old woman, ‘What have you done with the profit from your crops?’ She said to me, ‘I bought myself a bed.’ Now, that woman could have been my mother. And she’s never slept on a bed. And others told me they can now afford to buy clothing for their children …”

At the same meeting, a white farmer named Eddie Prinsloo strode to the stage and surprised everyone by addressing the audience in the language of South Africa’s Sotho ethnic group. He farms in the Free State, a province that has a reputation for conservatism and a long history of racial division.

But Prinsloo, a sheep farmer, said he’d “never cared much” for reputations, least of all his own.

Even during apartheid, he gave animals to his black workers and helped them make money by setting up their own breeding operations and auctions.

Two years ago, Prinsloo went much further: He approached the state to transfer one of his two farms to his laborers, transforming them into commercial farmers.

“Today, people still ask me, ‘How could you give such a beautiful farm to your workers?’ I wanted to do it. It was the right thing to do. How selfish it would be of me to have everything while others have nothing?”

Prinsloo said as long as the majority of black people live in poverty, “without any pride or privilege,” South Africa is doomed … not just white farmers.

Wiese has funded the studies of several black youngsters at agricultural college. He’s adamant that seizing white-owned land will do more harm than good to South Africa, and it isn’t the way to achieve “good” land reform. But, Wiese argued, it is a good way to force white farmers out of the country they love.

“When I listen to the talk about expropriating land without compensation, the first thing that comes into my mind is: Can we really afford to lose our top food producers?”

Threatened by crime and, now, land expropriation, hundreds of white farmers have already left South Africa. They’re farming across the world, from Angola, to Canada, to Georgia in Eastern Europe.

In recent years, just 12 of them have transformed Zambia to a net exporter of corn from a net importer.

Prinsloo, however, is optimistic that white farmers like him have a place in South Africa.

“The president [Cyril Ramaphosa] is a [game] farmer; many ANC members have farms. I believe that deep down, they understand us. We support them; they’re not the enemies of the white farmer. Together, we are going to make land reform work in this country.”