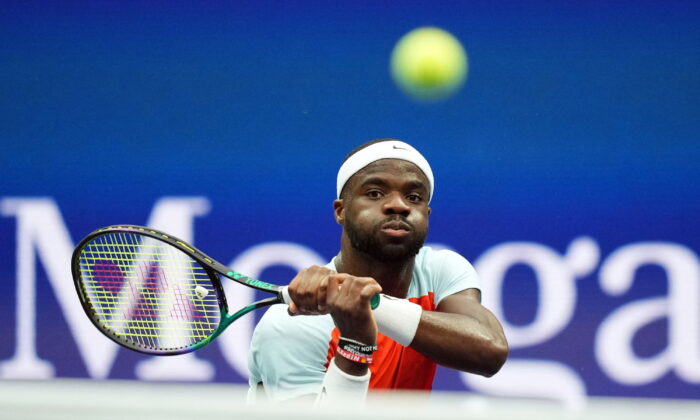 NEW YORK—With the hopes of a nation resting on his shoulders, American Frances Tiafoe rose to the occasion on Sept. 7, by reaching his first Grand Slam semifinal with 7–6(3), 7–6(0), 6–4 win over Russian Andrey Rublev at the U.S. Open.

Not since Andy Roddick in 2003 has a U.S. man won the title at Flushing Meadows and the pressure was on for the 24-year-old to build on his stunning win over second seed Rafa Nadal in the fourth round.

He did not disappoint, launching 18 aces and 46 winners in a dominant performance, injecting new excitement among the home crowd after 23-times Grand Slam winner Serena Williams bowed out following what is expected to be her final appearance in the third round.

Rublev put up a fight for two sets but his game unravelled as Tiafoe stormed through the second set tiebreak, shouting out in anger and whacking his racket after an ace from the American flew past him.

The Russian bit down on a tennis ball and sat with his face buried in a towel after Tiafoe triumphed in a 16-shot rally to get the only break of the match in the seventh game of the third set.

Tiafoe sealed the in with an ace as the crowd to the delight of the roaring crown on Arthur Ashe Stadium.