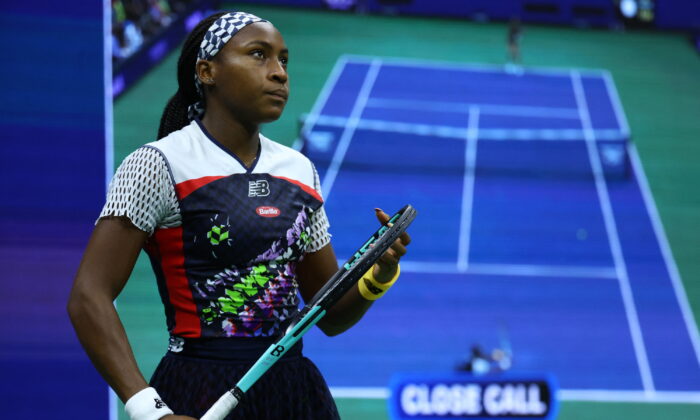 Mixed Feelings for Coco Gauff After US Open Quarter—Final Exit

NEW YORK—Coco Gauff said she was trying to strike a balance between satisfaction at reaching the U.S. Open quarter-finals for the first time and disappointment after being outplayed by Caroline Garcia on Tuesday.

French Open finalist Gauff came into the year’s final Grand Slam with weighty expectations from American tennis fans, who hoped the dynamic teenager would take the baton from the retiring Serena Williams.

“Overall I’m super proud of myself in this tournament,” Gauff told reporters.

“But I’m hungry for more. So maybe next year.”

After her 6–3, 6-4 defeat to Frenchwoman Garcia, Gauff said she had been a bit hesitant coming into the tournament after rolling her left ankle and retiring from a tune-up event in Cincinnati last month.

“I’m just proud of how I was able to come through this week. After everything that happened in Cincinnati, I didn’t tell anyone, but I didn’t think it was going to be that good of a tournament for me,” she added.

“I really proved to myself mentally that I can come out of these tough situations and do it.

“First quarter-final, too, at the U.S. Open, so there’s a lot to be proud of. But, like I said, definitely disappointed. I Think it makes me want to work even harder. I feel like I know what I have to do.”

Gauff, who will enter the top 10 for the first time after her quarter-final run in New York, said she hopes she can be an example for the next generation of Black players like Serena and Venus Williams had been for her.

“The Williams sisters definitely inspired me to play tennis because I saw someone like me playing in a sport with not a lot of people looking like me,” she said.

“I hope I can be that for other kids.”