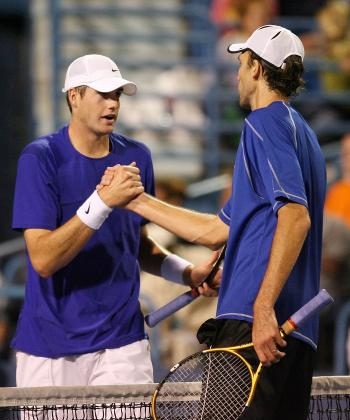 Clash of the Titans

On Tuesday night at the Pilot Pen tennis tournament at Yale University—the final warm-up prior to the U.S. Open—6-foot, 10-inch Croatian Ivo Karlovic beat 6-foot, 9-inch American John Isner 6–7 (4), 6–3, 6–4. A record was set for average height of players in a professional tennis match.

Karlovic is currently ranked 14th in the world while Isner, six years younger, is ranked 124th.

The match began as most would expect—with the server in absolute control. Both players easily held serve, and predictably a tiebreak would decide the first set. Isner picked the right moment to make an impression on Karlovic’s serve leading to a 7–4 victory in the tiebreak.

Karlovic broke Isner at love in his first return game of the second set, and coasted to a 6–3 win. At this stage, the difference in the ranking of the two giants started to show.

The third set appeared headed toward another tiebreak when at 4–4, Karlovic broke Isner for the second time. The towering Croatian then served out the match after double-faulting on his first match point.

Karlovic out-aced Isner 17–13 and won a remarkable 88 percent of points on first serve. He never faced a break point in the nearly two-hour long match.