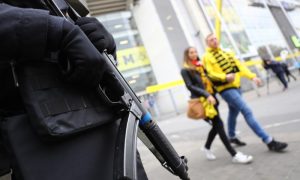 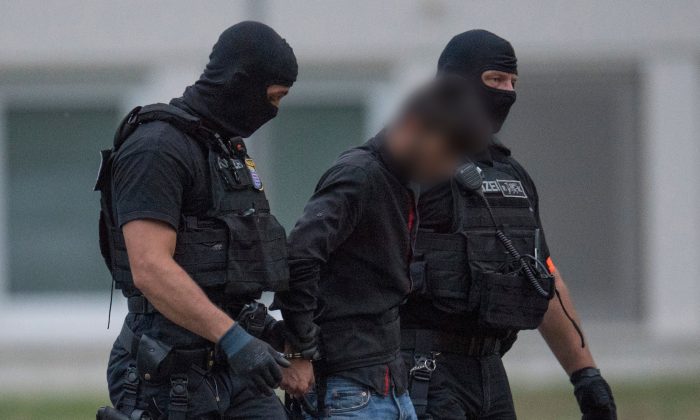 BERLIN—Ten men were detained in raids around Frankfurt on Friday, March 22, on suspicion of planning an Islamist attack using a vehicle and guns with the goal of killing as many people as possible, prosecutors said.

Several of the suspects, aged 20 to 42, were German citizens, a spokeswoman for the prosecutor’s office said, without naming the other nationalities.

“They are believed to have agreed to carry out an Islamist, terrorist attack using a vehicle and guns that would kill as many ‘non-believers’ as possible,” the statement from the Frankfurt prosecutors said.

“To prepare the attack, they had already made contact with different arms dealers, rented a large vehicle and collected financial assets to use for the purchase of guns and the execution of the planned murders,” they added.

The main suspects were a 21-year old man from Offenbach, a city near Frankfurt, and two 31-year brothers from Wiesbaden, all of whom were associated with the Islamist Salafist community in the area, prosecutors said.

Another man was also detained, prosecutors said, without giving further details. There was no immediate statement from any lawyers for the detained men.

Authorities seized 20,000 euros in cash, several knives, small amounts of drugs and numerous documents and electronic devices, during raids carried out by 200 police forces and other law enforcement experts, the prosecutors said.

As global pressure is mounting for social media giants to remove footage of the New Zealand Christchurch mosque attacks from their platforms, Turkey’s President Recep Tayyip Erdogan used part of the footage as an election campaign prop in his rallies to secure votes for local elections this month.

Erdogan screened partially blurry footage of the shootings with the caption, “A terrorist who is the enemy of Islam and the Turks,” during a number of election campaign events over the weekend, the Financial Times reported.

The 17-minute footage of the fatal mosque shootings was first live-streamed by the accused gunman on Facebook, and the social media tech giant—along with Twitter and Google’s YouTube—is struggling to spot new uploads despite enforcing a ban on the clip, reports The Guardian.

The calls follow Facebook admitting to removing 1.5 million videos around the world in the first 24 hours following the massacre which claimed the lives of 50.

“In the first 24 hours we removed 1.5 million videos of the attack globally, of which over 1.2 million were blocked at upload … ,” Facebook Newsroom wrote on Twitter on March 16.

But Facebook failed to remove one version of the footage monitored by the Guardian for over six hours, while other versions on YouTube were left live for at least three hours.

The governments of New Zealand, Britain, and Australia have urged the tech giants to do more to halt the spreading of offensive material and terrorist content online.

Speaking to the Daily Express, UK Home Secretary Sajid Javid said social media platforms must do more to tackle offensive content or face legal ramifications, saying they had a “responsibility not to do the terrorists’ work for them.”

International media sites such as the Mirror, MailOnline, and the Sun have also been met with intense scrutiny over their decision publish parts of the footage.

MailOnline published a story which included an 18-second clip of the attack in al-Noor mosque in Christchurch on autoplay, with part of the clip featuring on the site’s homepage. The media site also uploaded an alleged 74-page manifesto from the suspected gunman.

For a brief period this morning the Mirror website ran some edited footage filmed by the gunman in Christchurch. We should not have carried this. It is not in line with our policy relating to terrorist propaganda videos

Both the footage and the manifesto were removed after the site received barrage of complaints, while The Mirror also removed its edited footage filmed in the Christchurch mosque, the Guardian reported.