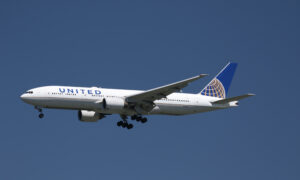 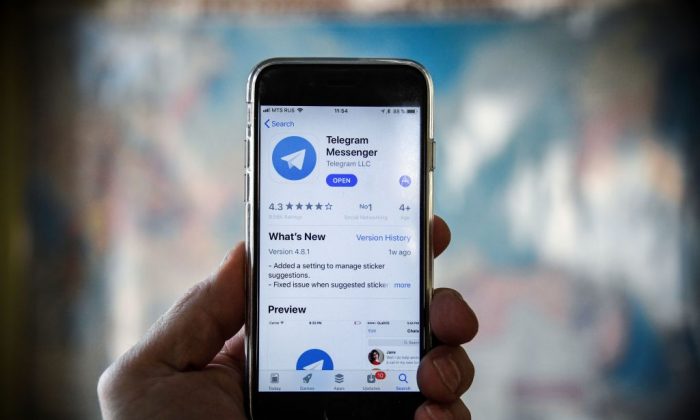 The Telegram app on a smartphone in Moscow on April 6, 2018. Russia's telecom watchdog asked a Moscow court to block the popular messaging app, after a deadline for it to hand over encryption keys to security services expired. (Alexander Nemenov/AFP/Getty Images)
Companies

How big of a deal is this? It’s big, considering the March initial public offering (IPO) of Dropbox Inc.—considered the biggest tech IPO since Snap—generated $756 million. That’s less than half of the amount raised by Telegram Group Inc. in its two token sales in February and March.

Telegram operates a namesake secure messaging app, which is popular with users due to its encryption and privacy. The app is free, has no ads, and allows users to make their messages self-destruct after a period of time. The app has around 200 million monthly active users, the company says.

ICOs, which are largely unregulated at the moment, are a way for early-stage blockchain ventures to raise funding without selling equity, by selling tokens that can be used on the blockchain.

But before Telegram’s ICO even commenced, the company said it had raised $850 million each in two separate private pre-ICO token sales for a total of around $1.7 billion, according to filings with the U.S. Securities and Exchange Commission.

The company announced plans to sell more tokens later this year through an ICO, potentially increasing its take in what is already the largest ICO in history.

Telegram’s ascension has occurred quickly and seemingly out of nowhere. Its successful pivot into cryptocurrencies also stands in contrast to the rest of the sector, which has seen ICO activity and coin/token values drop in 2018. The total market capitalization of all digital currencies was around $263 billion on March 31, a steep decline of 56 percent from $604 billion as of Dec. 31, 2017, according to CoinMarketCap.

The Dubai-based, British Virgin Islands-registered company was founded by Pavel Durov, a Russian national who left his country in 2014 after Russian authorities pressured him to censor political factions in opposition to the Putin regime. He moved Telegram’s team to Dubai and directed its app to focus on encryption, security, and privacy.

Telegram’s messaging app has also become a favorite of digital currency investors; its emphasis on security and privacy particularly resonates. As of October 2017, 99 percent of all ICO issuers used Telegram to communicate with their investors and communities, according to research from ICOWhitelists.

Prior to its token sales this year, Telegram was funded by Durov’s personal fortune, which he obtained after cofounding VKontakte, one of Russia’s leading social media platforms.

Using the proceeds, Telegram aims to develop its own decentralized peer-to-peer blockchain network to host communication and commercial applications, similar to the ethereum platform, according to a copy of its ICO white paper reviewed by The Epoch Times.

Tokens running on the TON blockchain will be called Grams. There’s a fixed supply of 5 billion Grams, 4 percent of which will be reserved for the development team over a vesting period, and at least 52 percent of the supply will be kept in reserve to “protect the nascent cryptocurrency from speculative trading and to maintain flexibility at the early stages,” the white paper said.

Telegram’s plans for TON are grandiose—encompassing commercial applications such as payments as well as mobile communications—yet short on details. Gram tokens will be used to pay for future services on its blockchain applications.

The amount of funds raised is staggering considering that unlike with an IPO, investors in the pre-ICO and ICO do not own equity in the underlying company, do not have the right to vote on company matters, and do not directly benefit from future profits. In addition, Telegram as a company is pre-revenue and pre-product in many ways; much of the anticipated value is derived from applications running on its future blockchain.

As such, investing in Telegram’s tokens is highly risky.

Despite this, Telegram’s private token sales have been funded by a number of high-profile investors. For example, Silicon Valley venture capital firms Kleiner Perkins Caufield & Byers, Benchmark Capital, and Sequoia Capital all participated in the pre-ICO, according to the Financial Times.

One possible reason for the unusually high demand for Telegram tokens is the unique cryptocurrency exposure offered by the company. Many large investors are not equipped to pick and choose individual tokens to invest in, given their risky nature. Telegram offers diversification across the sector in one token, given its dominance in the industry and the dependence all ICO issuers place on its services.

In an ironic twist, Telegram’s messaging app may no longer have a future in its original home country.

Russia’s Roskomnadzor—the country’s telecommunications regulator—said on April 6 on its website that it had filed a lawsuit in Moscow to ban the Telegram app in Russia after the company had refused to turn over the encryption keys for its users’ chats to the FSB, the successor to the KGB.

The Roskomnadzor on March 20 told the company that it must hand over the keys within two weeks. A 2016 anti-terrorism law stipulated that all encrypted communication technologies within the country must provide backdoor keys to Moscow authorities.

Durov wrote in a tweet, “Threats to block Telegram unless it gives up private data of its users won’t bear fruit,” adding that the app stands for “freedom and privacy.”

The government of Iran also reportedly banned the app in late March, after Telegram was found to have been used by certain individuals to organize anti-regime protests last year. U.S.-based Middle East-focused media Al-Monitor reported that Iran’s ban is also partially based on Iran’s fears that Telegram’s cryptocurrency could threaten the future of the national currency.

Telegram is one of the only messaging platforms that, it appears, does not allow backdoor access for governments, which has also attracted criticism from some Western nations, due to fears it will be used by criminals.

UK Prime Minister Theresa May told attendees at the World Economic Forum in Davos earlier this year that platforms such as Telegram “can quickly become home to criminals and terrorists” due to privacy features, according to the Financial Times.