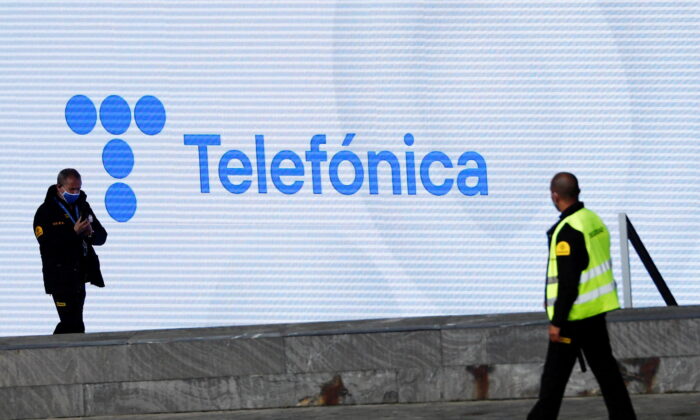 Security guards walk past a screen displaying the logo of Spanish Telecom company Telefonica at its headquarters in Madrid, Spain, on May 12, 2021. (Sergio Perez/Reuters)
Companies

Telefonica Reaches Agreement to Cut About 2,700 Jobs in Spain

MADRID—Spain’s Telefonica has reached an agreement with labor unions to cut some 15 percent of its domestic workforce via voluntary redundancies in a plan estimated to cost it 1.5 billion euros ($1.7 billion) this year, the telecoms group said on Tuesday.

The plan to cut around 2,700 jobs in an increasingly competitive market in early 2022 will yield annual savings of more than 230 million euros from 2023, Telefonica said in a filing to the stock market regulator.

“The impact on cash flow generation will be positive in 2022 as will the booking of savings, since the employees will leave during the first quarter of 2022,” the company said.

The program, open to all those born in 1967 or earlier and with at least 15 years of employment at the company, will limit the percentage of departures from some areas, the company said.

Telefonica had initially intended to spare business units dedicated to cybersecurity, marketing, and artificial intelligence, though unions opposed. The company intended at first to offer a package to about 1,800 workers.

The company is Europe’s third-largest telecoms firm and employs 18,500 people in Spain. The redundancies follow similar moves by rivals Vodafone and Orange in recent months.

Telefonica has been grappling with intense competition in an increasingly low-cost Spanish market as well as pressure from investors at a time when it needs funds to finance 5G infrastructure.