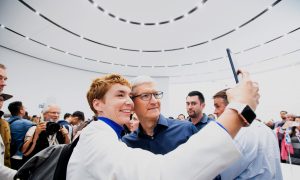 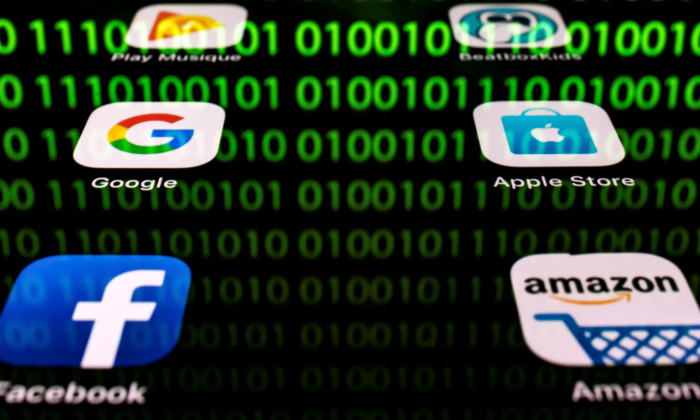 This illustration picture taken on April 20, 2018 in Paris shows apps for Google, Amazon, Facebook, Apple (GAFA) and the reflexion of a binary code displayed on a tablet screen. (Lionel Bonaventure/AFP/Getty Images)
Viewpoints

This is tantamount to AT&T enabling numerous companies to surveil and data-mine (including content) home and office phones and PCs for financial gain.

A smartphone is an integrated cellular phone and PC. This means that a smartphone is no less significant than a home and office phone or a PC.

No individual, business professional, or government official would willingly enable multiple companies from around the world, including China, to surveil and data-mine their home and office phone or PC for financial gain. Yet this is what’s happening when it comes to the use of smartphones, tablet PCs, voice-automated products, connected products, and PCs that are supported by the Android operating system (OS), Apple iOS, and Microsoft Windows OS.

It’s clear that any company that can surveil and data-mine a telecom subscriber’s personal and professional telecom-related activities will have a huge advantage over its business competition.

Companies such as Alphabet Inc. (Google) compete in many industries worldwide, yet are enabled to surveil and data-mine telecom subscribers, via smartphones that are supported by protected telecom infrastructure that’s governed by the FCC.

Consider this: If Google was a state actor, it would need a warrant from a domestic judge or the U.S. Foreign Intelligence Surveillance Court (FISC or also known as FISA) in order to lawfully surveil and data-mine a U.S. telecom-product user.

State actors such as the Chinese company Baidu are enabled, through partnerships with companies such as Google, to surveil and data-mine U.S. telecom subscribers by way of intrusive pre-installed content such as web browsers, apps, and widgets, plus other intrusive and leaky content.

The public and lawmakers need to understand that intrusive content, such as apps developed by Google, Apple, Microsoft, Samsung, Amazon, Facebook, and Baidu, are nothing more than a legal form of malware programmed to enable the app developer with the ability to surveil and data-mine the app user for financial gain.

Enabling companies such a Google or Baidu to indiscriminately surveil and data-mine U.S. telecommunications subscribers means that such companies can harvest confidential and protected data, which is illegal, as well as unethical, on numerous levels since Google and Baidu compete in numerous industries worldwide.

Obviously, companies such as Google, Apple, Microsoft, Amazon, Facebook, Baidu, and other tech giants have a huge competitive advantage over their existing and future competitors, stifling competition and innovation, while killing privacy and cyber security in the process.

Business professionals who work for companies that compete against the tech giants are using leaky telecommunication products that expose their confidential and protected corporate information to existing and future business competitors. These business professionals might as well be enabling the tech giants to surveil and data-mine their home and office phones and PCs for financial gain and competitive advantage.

Business professionals, for the most part, only have two choices when it comes to smartphones: Apple iPhones or products supported by the Android OS.

Because of deals between Apple and Google, business professionals who work for companies that are in competition with Google have virtually no choice but to use telecom products that leak confidential and protected telecommunications and data to Google.

Many Apple users are unaware of deals between OS developers such as Apple and Google that enable companies such as Google to surveil and data-mine Apple product users. This means that even though Apple views Google as a competitor, Apple still values Google as a customer, which reportedly pays Apple upwards of $9 billion to $12 billion a year to gain access to Apple product users.

Google and Microsoft, in turn, auction off their OS product users to the highest bidders, such as Baidu, which is a state-owned Chinese company and a Google content developer.

These types of exclusive deals between OS developers and original equipment manufacturers (OEM) are clear examples of violations of antitrust and unfair business competition, which the FTC and state attorneys general are refusing to enforce.

Additionally, BlackBerry and flip phone OEMs have adopted the Android OS, so there is virtually no option in the marketplace for a person to buy a telecom product that doesn’t leak confidential and protected telecommunications and data to Google.

In March of 2018, I tried to purchase a private, secure, and safe smartphone, tablet PC, or even a flip phone from Verizon.

Initially, Verizon said that they could sell me such a product, but after three months of vetting their so-called private, secure, and safe solutions, I proved to Verizon that all suggested solutions were not private, secure, or safe. In July 2018, Verizon agreed with my analysis of their solutions.

To my astonishment, Verizon admitted that they could not sell me a private, secure, or safe telecom product due to uncontrollable pre-installed surveillance and data-mining technology (apps, widgets, etc.) developed by Google, Apple, and Microsoft plus their affiliates such as Amazon, Facebook, and Baidu.

“We have reviewed your request at the highest levels of our organization and have confirmed that the only solutions to make a phone private and secure are available through third parties, not directly from Verizon. … Additionally, Verizon is not equipped to address pre-installed solutions or applications on any device,” Verizon told me on July 2, 2018.

Not only are business professionals leaking confidential and protected information to their existing or future business competitors, but they are also leaking information to nation-state companies from China, such as Baidu.

However, all major media outlets have no problem reporting on intrusive telecom-related surveillance and data-mining technology developed by ZTE and Huawei.

Why are the FTC, FCC, and lawmakers enabling Google to distribute telecom-related surveillance and data-mining technology developed by a nation-state company from China?

How did we get here?

Lobbyists for tech giants have paved the way for companies such as Alphabet Inc. to surveil and data-mine U.S. telecommunication subscribers (individuals and businesses) and authorized device users, which include adults and children.

The former chairman of Alphabet Inc., Eric Schmidt, explained in an interview with The Atlantic in 2010 how tech giants can lawfully buy off lawmakers in Washington:

“‘The average American doesn’t realize how much of the laws are written by lobbyists’ to protect incumbent interests,” Schmidt told Atlantic editor James Bennet at the Washington Ideas Forum. ‘It’s shocking how the system actually works.’ … ‘Washington is an incumbent protection machine.'”

Later in the interview, Schmidt says, “Google policy is to get right up to the creepy line and not cross it.”

Due to the predatory surveillance and data-mining business practices employed by Google, I believe Google crossed the “creepy line” in the 1990s, while the company today is forcing their way into all of our lives via smartphones, tablet PCs, voice-automated products, and other connected technology such as everyday electronics that are supported by the Android OS.

These privacy and cyber security issues are not just limited to Google but are systemic to any smartphone, tablet PC, voice-automated product, connected product, and PC that is supported by the Apple iOS and Microsoft Windows OS.

Frankly, Google, Apple, and Microsoft have killed privacy and cyber security for good, due to their predatory surveillance and data-mining business practices.

Due to potential violations of existing consumer law coupled with civil liberty, privacy, cyber security, and safety threats associated with smartphones, PCs, and other connected technologies, it’s time for lawmakers to pass legislation that will protect technology product users from such companies discussed above.

It’s time for an “Electronic Bill of Rights.”

In my next article, which will be the last in this series, I’ll address the need for an Electronic Bill of Rights.