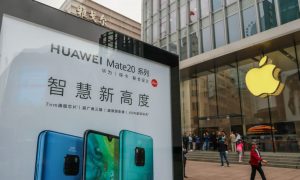 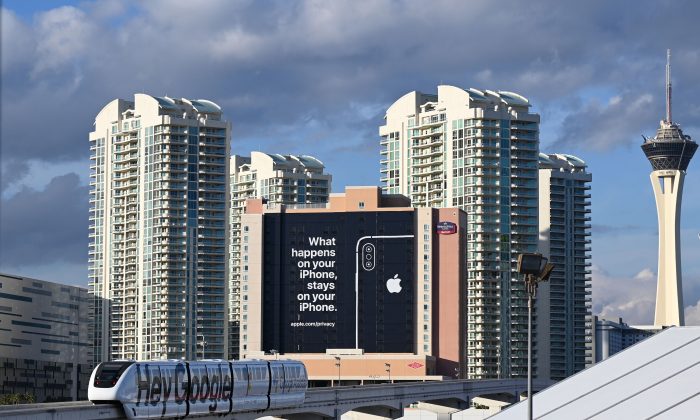 A monorail train plastered with a Google advertisement passes a giant sign from Apple on a building as preparations are underway for the CES 2019 show, Jan. 6, 2019, in Las Vegas, Nevada. Apple is taking a shot at rivals such as Google on the data privacy front with the message reading "What happens on your iPhone stays on your iPhone." (ROBYN BECK/AFP/Getty Images)
Viewpoints

Apple is taking advantage of the fact that the general public does not understand the company’s surveillance and data-mining business practices in regard to its privacy claim at the Consumer Electronics Show (CES).

Apple’s CES ad is an example of a deceptive trade practice regarding its privacy policies. Like Google, Microsoft, and Facebook, Apple does not directly sell its product users’ personal and professional information to third-parties.

However, what Apple does not disclose to the public is that it sells access to their product users via addictive surveillance and data-mining technology, in the form of apps that are supported by exploitative terms of use.

Nearly all Apple content, such as pre-installed Apple apps and those distributed by its App Store, are programmed to enable the app developer with the ability to indiscriminately monitor, track, and data mine the Apple product user for financial gain.

Case in point, Apple reportedly sold access to its product users to Google for an estimated $9 billion in 2018 and $12 billion in 2019, according to Fortune and Business Insider reports in 2018.

The deal allegedly allows Google to be the default search engine in the Apple Safari web browser, enabling Google to exploit the Apple product user for financial gain at the expense of the user’s privacy, cybersecurity, and safety.

Apple product owners are totally unaware that they have to accept exploitative Google terms of use in order to use their Apple product, such as the iPhone, after the product has been purchased.

“14. Third Party Acknowledgements. Portions of the iOS Software may utilize or include third-party software and other copyrighted material. Acknowledgements, licensing terms and disclaimers for such material are contained in the electronic documentation for the iOS Software, and your use of such material is governed by their respective terms. Use of Google Safe Browsing Services is subject to Google Terms of Service and to Google’s Privacy Policy.”

Google also is listed in the content developer acknowledgements for the Apple Numbers app (a spreadsheet application).

Any person who owns an iPhone and uses the pre-installed Apple Numbers app is unknowingly enabling Google to indiscriminately monitor, track, and data mine surveillance information (e.g., location data) and sensitive user data for financial gain.

Apple is not even disclosing that pre-installed Apple apps, such as the Numbers app, are co-developed by Google.

This implies that Apple is hiding that it is enabling Google to indiscriminately monitor, track, and data mine Apple product users for financial gain.

Apple has no right to mislead the public in regards to their privacy policies as long as Apple is selling access to their users to companies such as Google who employ predatory surveillance and data-mining business practices.

Many news organizations are reporting the CES Apple privacy ad as a slam to Google, when in reality Apple and Google are both surveilling and data mining the Apple product user for financial gain at the expense of users’ privacy, cybersecurity, and safety.

The only way the Apple product user could ensure privacy is not to use any of the pre-installed Apple apps, which would basically make the iPhone useless.

The apps also enable the Apple content developers to take control of the iPhone’s microphone and camera, enabling them to take pictures plus record audio and video of the Apple product user’s activities 24 hours a day, seven days a week, 365 days a year.

Have a look at all the apps on your phone and see how much information app developers have access to.

T-Mobile confirmed that Apple iPhones are no more private than smartphones supported by the Android OS (Google):

“We, too, remember a time before smartphones when it was reasonable to conclude that when you activated service with T-Mobile that only T-Mobile would have access to your personal information. However, with the Samsung Galaxy Note, the iPhone, and many other devices, there are indeed a variety of parties that may collect and use information,” the T-Mobile privacy team said in response to an Federal Communications Commission Consumer Complaint #423849 filed by me.

The Apple ad campaign and the reporting by other news organizations are misleading to the public, and should be investigated by the Federal Trade Commission.