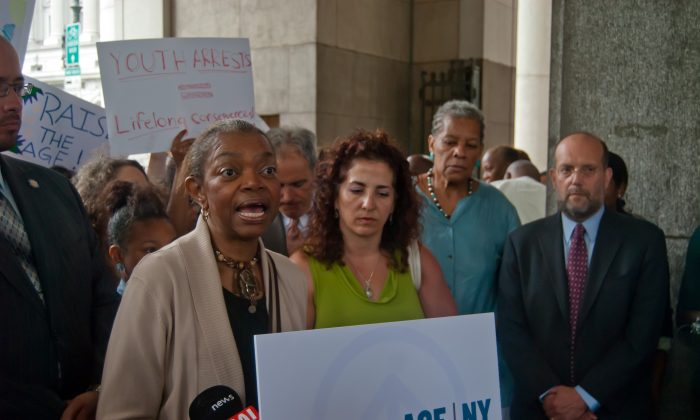 NEW YORK—New York and North Carolina are the only two states in the country that prosecute all 16 and 17 years olds as adults, regardless of the crime. If found guilty, they are sent to federal prisons where they can be subjected to solitary confinement, either as punishment or to protect them from adult inmates.

Nazario, who now works as a case manager for the Center for Community Alternatives, told the Epoch Times that in order to “try to find ways out of the box,” teenagers at Rikers Island would often fake suicide attempts.

Democratic senators said they would make reversing the law that automatically tries youth as adults a key issue in the state Senate.

“We are going to be moving on this as our top priority,” Sen. Velmanette Montgomery (D-Brooklyn) said during a July 11 rally in front of the Manhattan Municipal Building, along with community leaders, activists, and other officials, including Sen. Gustavo Rivera (D-Bronx) and Sen. Ruth Hassell-Thompson (D-WF).

In the upcoming fight, the long-term effects of solitary confinement will most likely be a leading argument. Many speakers at the rally cited it as one of the most damaging incarceration policies for youths.

United Nations Special Rapporteur on Torture Juan E. Méndez stated in a 2011 report that solitary confinement should be limited to extreme cases, yet “banned by States as a punishment or extortion technique.”

In the United States, however, such a form of penal punishment is still common. According to a 2012 joint report by Solitary Watch and Human Rights Watch, “At least 80,000 prisoners are in some form of isolated confinement.”

An estimated 95,000 youth under the age of 18 were held in prisons or jails in 2011, according to a Human Rights Watch and American Civil Liberties Union report. Approximately 2.3 million people are incarcerated in the United States, according to the National Association for the Advancement of Colored People.

“A significant number of these facilities use solitary confinement—for days, weeks, months, or even years—to punish, protect, house, or treat some of the young people who are held there,” stated the report.

The practice was started in 1786 by Quakers looking for an alternative to criminal punishments that followed settlers from England—often public hangings or whippings. It began at Pennsylvania’s Walnut Street prison and was replicated in New York’s Auburn State Prison in 1821.

The effects, however, were horrific. In 1821, the French government commissioned a report on the system, which famously states “This absolute solitude, if nothings interrupted it, is beyond the strength of man; it destroys the criminal without intermission and without pity.”

With youth, whose minds are still developing, the effects are even more pronounced.

Young people are less resilient than adults when it comes to dealing with the psychological pressure caused by solitary confinement, according to Human Rights Watch/American Civil Liberties Union. “Adolescents in solitary confinement describe cutting themselves with staples or razors, hallucinations, losing control of themselves, or losing touch with reality while isolated,” a report sponsored by the organization states.

After young people get out of prison, the lasting psychological damage is compounded by the harm of a criminal record.

“There are very serious long-term effects,” Gabrielle Horowitz-Prisco, director of the Juvenile Justice Project at the Correctional Association of New York, told the Epoch Times.

Reverend Ruben Austria, executive director of Community Connects for Youth, believes the solution for troubled youth is in reform rather than punishment. He has tested and proved this theory by offering alternative incarceration programs, which are based on community involvement and mentoring.

“It’s when we kind of leave them alone on the street that they start making dumb decisions, and putting them in prisons certainly doesn’t help with the process,” Austria told the Epoch Times.

“They just need a community of people to come around them, to say we’re here for you, we’re interested in your welfare, we believe in you, we’ll help you reach your dreams, and we’re going to hold you in check if you start to stray from the right path,” he said.