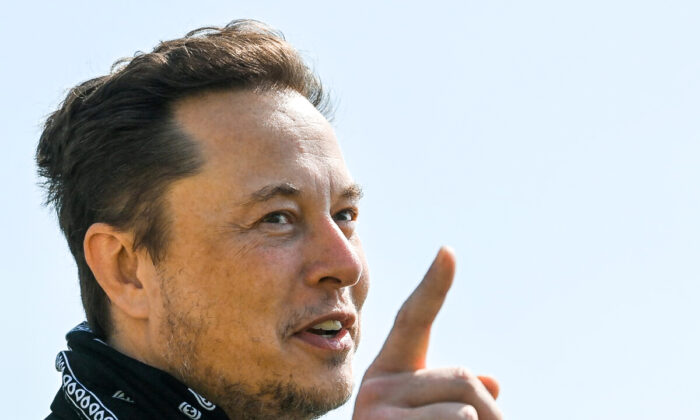 Tesla CEO Elon Musk gestures as he visits the construction site of Tesla's Gigafactory in Gruenheide near Berlin on Aug. 13, 2021. (Patrick Pleul/Pool via Reuters)
Companies

A teenager who runs a Twitter account that tracks Elon Musk’s private jet is now targeting more billionaires and their planes in the hopes of making some money, despite being blocked on social media by the Tesla chief executive officer.

Jack Sweeney, 19, created a Twitter account called “Elon Musk’s Jet” in 2020 during the COVID-19 lockdown, initially as a hobby.

The account tracks the businessman’s private jet and tweets out each time it takes off or lands, providing followers with a short summary of flight information, such as the location and duration of each trip.

However, Musk asked Sweeney to take down the account because it was a “security risk” and rejected a monetary offer by the teenager to remove the account.

Despite this, Sweeney, who is a freshman at the University of Central Florida, remains undeterred and is launching his own business called Ground Control.

The business will monitor the flight activity of private jets owned by other high-profile people such as billionaires Bill Gates and Jeff Bezos, according to Bloomberg.

“I knew he had a plane, you know, as a fan of SpaceX and Tesla stuff,” Sweeney said of Musk in an interview with Bloomberg. “I thought the Elon Musk’s Jet bot would reveal like where he’s going and what business he’s doing.”

In a direct message exchange of the conversation, confirmed by The Epoch Times, Sweeney explained to Musk how bots were able to track his jet and provided him with technical advice as to how he could make his aircraft less trackable.

“How about $5k for this account and generally helping make it harder for crazy people to track me?” Musk asked the teenager, to which Sweeney responded, “Sounds doable, account and all my help. Any chance to up that to $50K?”

While Musk initially agreed to think about the teenager’s counteroffer, he later wrote to tell him that it “doesn’t feel right to pay to shut this down.”

“I would like to state though I’ve already been tracking all those billionaires, I don’t really have any funding yet,” Sweeney told The Epoch Times.

Tracking private planes isn’t a new phenomenon and can sometimes provide critical business information about everything from a company’s (or individual’s) activity, to potential mergers and acquisitions.

In 2019, the flight path of a jet to Omaha, Nebraska, the home of investor Warren Buffett was tracked by Specialist research house Quandl.

The flight data was published by research firm Gordon Haskett Research Advisors who speculated that Buffet’s investment firm, Berkshire Hathaway Inc might be preparing to invest in Occidental Petroleum Corporation.

A day later, Berkshire announced it was funding $10 billion in cash into Occidental to back its $38 billion cash-and-stock offer for Anadarko Petroleum Corp.

The business of tracking private flights can also be extremely lucrative, with hedge funds paying upward of $100,000 per year to track the flights of corporate jets, according to Reuters.

Firms, including Nasdaq Data Link have taken note of the potential market and are now offering both private and corporate aviation intelligence to customers which it says can “confirm rumors” and “predict corporate activity.”

In the United States, the National Business Aviation Association has pressed the government for stricter blocking measures and is working with the Federal Aviation Administration (FAA) and others in the aviation industry to limit the sharing of aircraft data and increase privacy.

“Companies in flight tracking have millions in revenue per year,” Sweeney told Bloomberg. “Just a small cut of what they make would be good revenue for me.”

Update: This article has been updated with a statement from Sweeney.