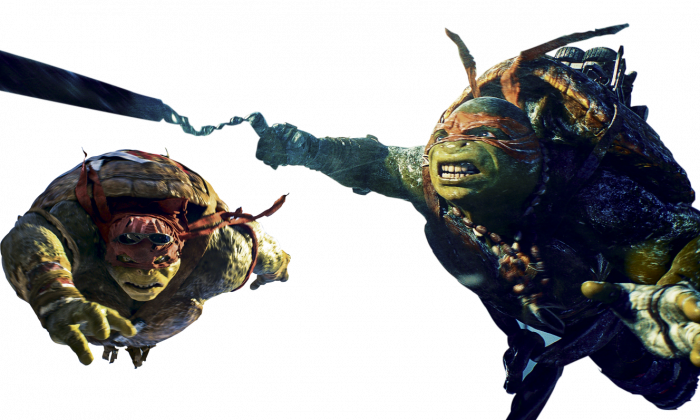 What happens when you team up Megan Fox and Michael Bay? Summer blockbuster! They hit pay dirt with “Transformers,” and now they’ve made a nice amusement park thrill-ride with 2014’s “Teenage Mutant Ninja Turtles” re-tread.

There’s already a whole adult faction that hates it, but you know, this is not really a movie for adults, now is it? It’s a boy movie. It’s got the classic pet that every boy must have (a turtle), but there’s a few of them, see, and they’re teenagers (they’re big!), and it’s got a super-pretty girl. And pizza! And, and, and—ninjutsu! Yeah! That’s not a film for adults.

Given the level of the disgruntled adult buzz, producer Michael Bay and director Jonathan Liebesman probably followed Rick Nelson’s advice: “You can’t please everyone, so you got to please yourself.” More likely, the massive earning potential of successfully turning “TMNT” into a franchise—allowed them to turn a deaf ear.

Have they permanently established the franchise? It would appear highly likely. They’ve done an origin story here, signaling confidence that this re-laying of the Turtle foundation will extend upward to skyscraper-sequel heights. In fact, June 3, 2016 has already been announced as the release date for the sequel.

So, the story goes: April O’Neil (Megan Fox) is a “froth” reporter. Jumps up and down on trampolines for the TV camera. She wants to be taken seriously as a journalist. Wouldn’t you?

One fine pouring-rain evening, she catches a glimpse of some immense, walking, talking, spinning, back-kicking Galapagos-looking individuals as they beat down a bunch of New York’s notorious Foot Clan baddies.

Problem is, she can’t articulate this scenario properly to boss Bernadette (Whoopi Goldberg) who says, “Let me get this straight. You’re saying there’s six-foot-tall turtles roaming the city, and no one sees them but you?”

April gets canned on the spot. But she eventually discovers who these freaky half-shell Bruce Lees are. Her deceased scientist dad actually created them long ago in the “Renaissance” project, with lab partner Dr. Sacks (William Fichtner). Karma! Destiny! Cowabunga!

However, unbeknown to April, billionaire Dr. Sacks is in cahoots with the head of the dastardly Foot Clan syndicate—Shredder! (Tohoru Masamune). You can see in Shredder remnants of the original Michael Bay-Megan Fox teaming. He looks like an Edward Scissorhandsian, stainless-steel samurai Transformer.

Shredder’s plan is to disperse an evil electric-green Gatorade-looking fluid into the atmosphere, and when people get sick, cure them with “mutagens” drained from the Turtles’ blood. Nice! Of course, the Turtles aren’t gonna be having that. There’s gonna be karate!

So what have we got so far? A 3-D, motion-capture, hi-def, realistic-looking cartoon about basketball-tall, 500-pound turtles that speak English. And have a rat as a dad. That learned ninjutsu out of a book. Which fell down into the sewer. Where they all live. These are the Turtles that worried the Shredder, that chased the rat, that ate the cheese (pizza), that lay in the house that Jack built.

How seriously should one take criticizing a movie about a kid cartoon? Should one obsessively compare and contrast it with the original drawings and style? Oh no! They put nostrils on the Turtles! It’s like Joel Schumacher putting nipples on the bat-suit!

Really? In the future, some new director will take the nostrils back off the Turtles, and the generation that grew up with the 2014 rendition will have a collective heart attack. That’s just how it goes. The question is, does the movie do what it’s supposed to do, and entertain the kids?

Oh yes. Consider the showbiz phrase “Cut to the chase.” Today’s CGI-generated chase has everything, including the kitchen sink, flying around in it. In 3-D, no less. Sometimes you have to duck objects flying at your head. It’s very dangerous.

The word “chase” no longer describes what these situations have become. “TMNT” has quite an excellent sliding-down-a-snowy-mountain “chase.” It’s because the Turtle shell, while clearly a form of shield, can also double as an upside-down snowboard. Shameless teen pandering? Of course it is. Who cares? Boys. Boys care.

Other pandering is the fact that while these Turtles have always been green, this new crew carries a familiar hue. Perhaps a future sequel will link franchises, and reveal the Turtles to be Shrek’s shelled cousins, only with the little flugelhorn ears inverted.

Now, nostrils on the Turtles are one thing, but the Turtles’ sensei is a nasty rat critter you wouldn’t want to touch with a 10-foot Bo staff. The greasy, bedraggled, dead-eyed appearance of sensei Splinter the rat (Tony Shalhoub) could have been modeled more on Master Shifu from “Kung Fu Panda.” That little red panda looked respectable, if diminutive.

One other misstep is that the excessive interspecies hitting-on of April by Michelangelo is just … somehow … wrong. He’s a harmless goofball. But still.

All in all, teenage smack-talk, pizza, gorgeous girl, martial arts madness, well-defined Turtle characters, and some good, watered-down samurai philosophizing—you can’t go wrong. Go out for pizza after, and anticipate your bamboo curtain rods getting ransacked to double as Bo staffs. Cowabunga!

For those of you completely unfamiliar with the Legend of the Ninja Turtles, they are as follows: