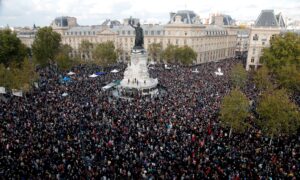 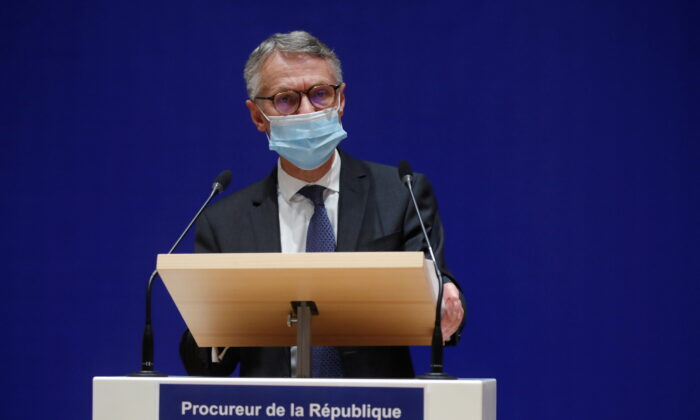 French anti-terrorism prosecutor Jean-Francois Ricard gives a news conference on the latest in the investigation over the murder of the French teacher Samuel Paty, who was beheaded on the streets of the Paris suburb of Conflans-Sainte-Honorine, at the courthouse in Paris, France, Oct. 21, 2020. (Charles Platiau/Reuters)
Europe

PARIS—The Chechen teenager who beheaded a French teacher for showing caricatures of the Prophet Mohammad in class had paid students to identify him in front of the school, France’s anti-terrorism prosecutor said on Wednesday.

Jean-Francois Ricard told a news conference the killer knew the teacher’s name and location of his school after a parent launched a campaign against Samuel Paty on social media, but had no way of identifying him at the school gates.

“This identification was only possible with the help of students from the school. They identified him in exchange for payment,” Ricard told a news conference.

Two students aged 14 and 15 were among seven people suspected of complicity to murder in a terrorist endeavor or association with a terrorist and handed over to a judge to determine whether they should be placed under investigation—at which point they would be treated as formal suspects.

Ricard also confirmed that the attacker, who lived in France on refugee papers, had made contact with the father of a Muslim girl who on social media accused Paty of stigmatizing Muslims and called for him to be fired.

Paty was beheaded on Oct. 16 in broad daylight outside his school in the middle-class Paris suburb of Conflans-Sainte-Honorine. His attacker was shot dead by police shortly afterward.

Investigators say the teenager had sought to avenge his victim’s use of caricatures of the Prophet Mohammad in a class on freedom of expression. Muslims believe that any depiction of the Prophet is blasphemous.

The parent who had posted the videos denouncing the teacher was also among the seven presented to the judge, as was a Franco-Moroccan activist, Abdelhakim Sefrioui, who was already known to intelligence services.

President Emmanuel Macron said on Tuesday that Sefrioui had been directly involved in the attack. The government dissolved Sefrioui’s “Sheikh Yassin Collective” on Wednesday.

The murder has shocked France, and carried echoes of the attack five years ago on the offices of satirical magazine Charlie Hebdo, after it published cartoons of Prophet Mohammad.

A national tribute in honor of Paty will be held at the Sorbonne university in Paris on Wednesday.