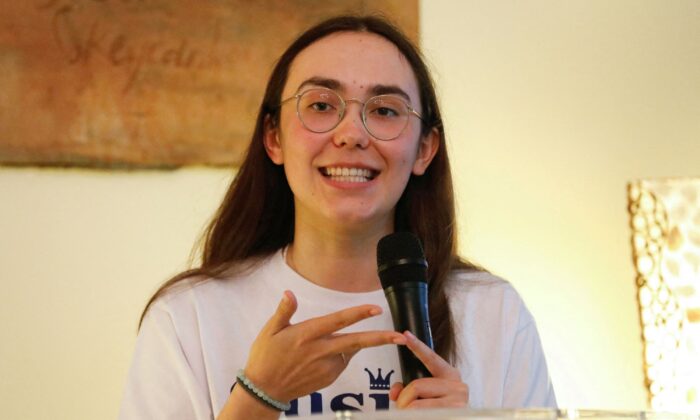 Belgian-British pilot Zara Rutherford, 19, gestures as she speaks during a conference at a Belgian ambassador's residence in Jakarta, Indonesia, on Dec. 22, 2021. (Ajeng Dinar Ulfiana/Reuters)
Europe

JAKARTA—Teenager Zara Rutherford, bidding to become the youngest woman to fly solo around the globe, recalled the challenges involved in crossing a deserted and icebound Siberia on Wednesday after landing in Jakarta.

The 19-year-old Belgian-British pilot, who left Belgium in August, hopes to complete her 51,000-kilometre (32,000 miles) trip across five continents and 52 countries by mid-January 2022.

The toughest leg so far was flying across northern Russia, she told reporters in the Indonesian capital, because if anything went wrong, help in sub-zero temperatures would likely be hours away.

“If for any reason the engine stops I think I could survive. I could either land on the land or (use) the parachute or ditch in the water. I’ll be ok,” she said.

“The problem is if I’m in minus 35 degrees Celsius, once I’m on the ground and I’m three hours away from the closest human, …I actually don’t know how long I can survive.”

To meet the criteria for a round-the-world flight, Rutherford has designated two points opposite each other on the globe, Jambi in Indonesia and the Colombian town of Tumaco.

Describing every solo flight as an “adventure” and a challenge of wits, the daughter of two pilots said she hoped her journey would inspire other young women into the fields of aviation, science, technology, mathematics, and engineering.

The record she is bidding to break is held by Shaesta Waiz, who was 30 when she flew solo around the world in 2017.