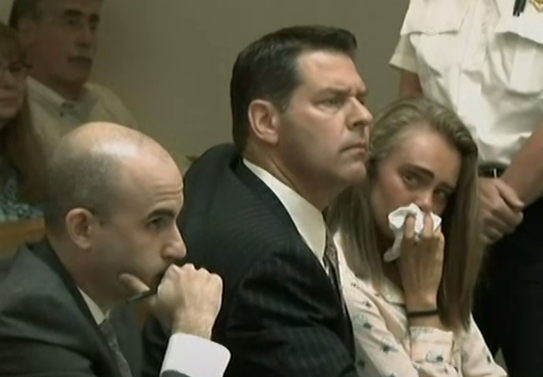 In 2014, Michelle Carter, then 17, encouraged her 18-year-old boyfriend to kill himself.

During the summer of 2014, Roy resolved to make another attempt.

Almost everything known of the case comes from their text messages.

Over a period of a few weeks, the pair concocted a plan for Roy to end his life.

According to the texts they exchanged, at first Carter seemed to want to discourage Roy. As time went on, she seemed to get frustrated by his inaction.

On the final night of his life, she seemed almost derisive as he got cold feet.

When Roy decided yet again not to kill himself that night, Carter sent him texts saying, “You keep pushing it off and you say you’ll do it but u never do. Its always gonna be that way if u don’t take action,” and “You’re just making it harder on yourself by pushing it off, you just have to do it”

The prosecution painted a picture of a conniving young women with few friends who hoped to gain sympathy because her boyfriend had killed himself.

The defense claimed that Carter really wanted to help Roy, and thought that if she pushed him hard enough, he would realize he didn’t want to die and would seek help.

A judge had to decide the case based purely on the texts. Everyone knows texts don’t convey much information.

Further the judge had to decide whether or not to expand the law—is it illegal to encourage suicide? Could a person 30 miles away be held responsible for the suicide of an already suicidal person?

The judge ruled that yes, it is, and yes, one can. He decided Carter criminally assisted Roy’s death.

He charged her with involuntary manslaughter, which under Massachusetts law is defined as an unintentional killing resulting from recklessness or criminal negligence.

Carter was tried as a youthful offender, meaning she was essentially tried as an adult. She faces a possible 20-year sentence.