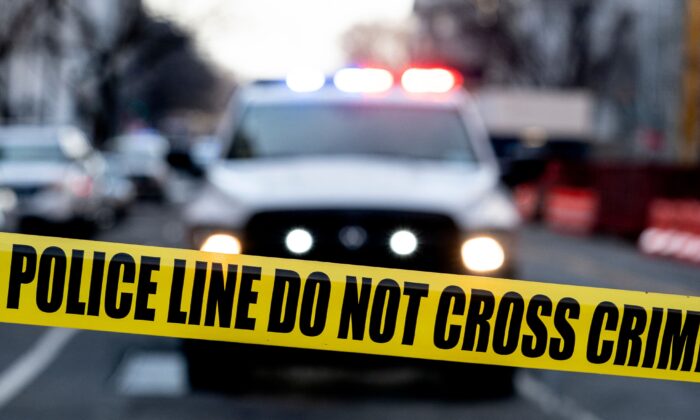 Police tape in front of a police vehicle in Washington, on Feb. 14, 2022. (Stefani Reynolds/AFP via Getty Images)
Crime and Incidents

One teenager has been killed and three people, including a police officer, injured during a shooting at an “unpermitted” music festival in Washington D.C. on Sunday afternoon, according to law enforcement.

The incident occurred at around 6 p.m. in the area of 14th and U Street, near a Juneteenth Music Concert, during an event called “Moechella,” D.C. Metropolitan Police Chief Robert J. Contee told reporters late Sunday night.

The Moechella event was described as an “Advocacy Festival Amplifying the Culture of Washington, D.C” on social media.

“At some point during the course of this gathering, there was some type of incident, of fight that happened between some of the individuals who were in attendance,” Contee said. “That incident was broken up but shortly thereafter, there was a second incident after a few minutes. We are unsure of what that incident was, but people started to scatter at that point in time. MPD members shut the event down because it appeared they went was unsafe.”

Law enforcement officials shut the event down and tried to clear people out of the area, Contee said, adding that several people had been injured after being trampled on while trying to run away from the area.

Shortly thereafter while law enforcement officials were rendering aid to the injured victims, a firearm was recovered from an individual in the area, the police chief said.

“Shortly after that, there was another incident that occurred right at the corner of 14th and U within very close proximity of our first responders, several individuals were shot, including a police officer,” Contee added.

“So right now, we have three civilians that were shot: two adults, one juvenile, and then one police officer who was shot,” he said.

The juvenile, a 15-year-old, is “deceased at this point,” Contee told reporters.

The union for the District of Columbia’s Metropolitan Police Department confirmed on Twitter that one of its members working in the area of 14th and U St NW had been shot, noting that “the member has been transported to the hospital and is in stable condition.”

Contee said that law enforcement are still investigating the shooting and have now recovered several firearms from the incident, including one that was recovered from one of the victims of the incident.

The incident took place over roughly two hours, between 6 p.m and 8:30 p.m, Contee said, noting that roughly 100 officers responded to the scene but “did not fire” at the suspect.

“We had a lot of officers in the area but none of them fired any shots,” Contee said.

Police did not identify the victims or name a suspect in the incident.

“We certainly want to make sure people are held accountable when they hold unpermitted events in our city,” Contee said Sunday night. “This is one of the reasons why we don’t want unpermitted events taking place in our city, unfortunately, things like this can happen when you have the wrong mix of people or people who introduce firearms into a situation.”

The police chief said officials will be looking at what legal action can be taken as a result of “unpermitted events” that happen in the city.