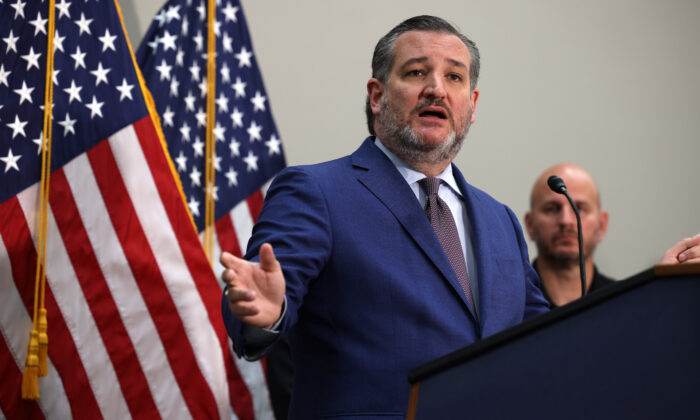 Sen. Ted Cruz (R-Texas) has walked back an earlier statement during which he described the Jan. 6 rally as a “violent terrorist attack.”

Cruz made the statement on the Senate floor on Jan. 5.

Cruz added, “Anyone who commits an act of violence should be prosecuted, and anyone who assaults a law enforcement officer should go to jail for a very long time.”

Amid a media circus in preparation for the anniversary that was rife with untrue and misleading claims about the events of Jan. 6, 2021, some conservatives rebuked Cruz for the statement.

Facing pressure from others in the GOP, Cruz decided to appear on Carlson’s show to walk back and clarify his original statement.

“You never use words carelessly,” Carlson said in his opening remarks to Cruz, “and yet you called this a terror attack, when by no definition was it a terror attack—that’s a lie.”

“You told that lie on purpose,” Carlson asserted. “I’m wondering why you did.”

“Tucker, thanks for having me on,” Cruz began.

“The way I phrased things yesterday, it was sloppy and frankly dumb,” Cruz admitted.

“I don’t buy that,” Carlson interjected, noting that as a former candidate for the Supreme Court, Cruz was not the type to be careless with his words.

“You take words as seriously as anyone who’s ever served in the Senate,” Carlson said, asserting “I do not believe you used that word accidentally. I just don’t.”

Cruz responded, “As a result of my sloppy phrasing, it’s caused a lot of people to misunderstand what I meant. Let me tell you what I meant to say.”

“What I was referring to are the limited number of people who engaged in violent attacks against police officers. Now, I think you and I both agree that if you assault a police officer, you should go to jail.”

Cruz continued that “the reason the phrasing was sloppy” was because people misunderstood what he meant by “terrorist.” Cruz said that he has long held the belief that those who assault police officers are terrorists, and that in using the word he was describing only those who engaged in such attacks.

That, argued Cruz, is why “a lot of people have misunderstood that comment.”

He emphasized that he agreed with Cruz that those who assault police officers should go to jail, but that it doesn’t make them a terrorist.

“How many people have been charged with terrorism on Jan. 6?” Carlson asked rhetorically.

At the time of publication, claims of “terrorism” and “insurrection” notwithstanding, Biden’s DOJ has yet to charge any Jan. 6 defendants with either charge.

“Why did you use that word?” Carlson asked. “You’re playing into the other side’s characterization that … allows them to define an entire population as foreign combatants—and you know that.”

Cruz boiled the disagreement down to semantics, insisting that his use of the word “terrorist” to describe those who assault police is not meant to be interpreted legalistically.

“That being said Tucker, I agree with you,” Cruz continued.

“It was a mistake to say that,” Cruz admitted, because the media has spent the past year “twisting words” in order to paint supporters of Trump as terrorists.

Returning to his controversial statement, Cruz said, “The reason I used that word is that’s the word I’ve always used for people who violently attack cops. But in this context, I get why people were angry.”

Cruz also clarified his position on the events of Jan. 6, saying “it’s a lie” to call what happened that day an “insurrection.”

For the past year, Democrats and their media allies have referred to the Jan. 6 rally as an “insurrection” and an “attempted coup.”

But even after House Democrats established the Jan. 6 Committee, which awarded itself the power to unilaterally seize the phone records of anyone who was ever close to Trump, no evidence to back up those claims has come to light.

According to all the information that the Jan. 6 commission has gathered, not a single major figure in GOP politics or in Trump’s confidence had any plans to overthrow the U.S. government. In fact, text and phone records indicate that most GOP figures and pundits were upset about the breakdown of the rally, and several asked Trump to intervene, which he quickly did.

Moreover, nobody who entered the Capitol that day has been charged with insurrection, sedition, or terror-related charges, despite the DOJ carrying out one of the largest manhunts in its history to round them up.

For the past several months, many of those arrested have been subjected to psychological and physical torment inside of the D.C. jail for months on end, violating their Sixth Amendment right to a fair and speedy trial.

Defendants who are unable to afford an attorney have been paired with public defenders who reportedly have been treating them as guilty from the outset.

According to an investigation by Rep. Marjorie Taylor Greene (R-Ga.), many Jan. 6 defendants have been denied haircuts or even access to a razor, effectively making them less presentable for court and thus more likely to face conviction.

The defendants have also had to wait for hours at a time to access a restroom, have been denied contact with their families or attorneys, and have been called “white supremacists” for their support of Trump, while others have faced beatings and demands to renounce Trump from jail staff.