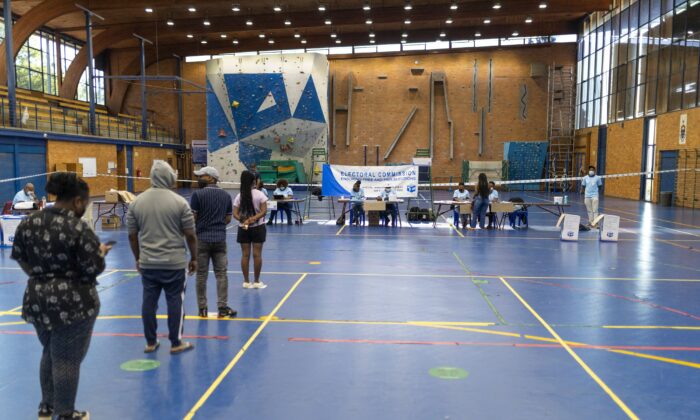 Voters stand in a queue to receive their ballots for South Africa’s local elections at the polling station at the University of the Witwatersrand (WITS) in Johannesburg on Nov. 1, 2021. (GUILLEM SARTORIO/AFP via Getty Images)
Africa

JOHANNESBURG, South Africa—There it was on South African TV screens on the morning of Thursday Nov. 4, a day that could yet signify a pivot—for better or worse—on the tumultuous axis of one of the world’s youngest, but troubled, democracies. As results from local government elections held on Monday rolled in, the shock began sinking in that the opposition Democratic Alliance (DA)—a multiracial party often branded “racist” and “in bed with white capitalists” by the ruling African National Congress (ANC)—had garnered the most votes in the city that bears the name of the ANC’s iconic former leader.

The ANC’s loss in Nelson Mandela Bay was a narrow one (by less than 1 percent). But for many analysts it represents a seismic shift in South Africa’s political landscape, and a stark symbol of the chasm that now exists between Africa’s oldest liberation movement turned political party, and the people it claims to represent in this nation of 60-million people.

Civil society groups say citizens are punishing it for decades of poor service delivery, state-led corruption, and failure to create jobs and to stop rampant crime.

One statistic is indicative of the ANC’s slide: A staggering 66 out of 278 city and town councils are now “hung,” meaning no party received enough votes to govern municipalities by outright majority. Almost all of the 66 were previously won comfortably by the ANC in 2016, an election that resulted in only 27 “hung” municipalities.

The ruling party will now be forced into uncomfortable coalitions with smaller parties, if it is to hold on to power in councils across the country, including the major metros of Johannesburg, Tshwane, Durban, and Nelson Mandela Bay.

But some of those parties, including the DA, say they’ve no interest in partnering with the ANC.

Overall, the ANC received 46 percent of the national vote, the first time its dipped below 50 percent since it became the country’s first democratic government in 1994 following decades of white minority rule.

As predicted, the ANC was trounced by the DA throughout the Western Cape province, which includes the city of Cape Town.

“The results represent a Tectonic shift in South Africa’s political landscape. It’s going to be hard for the ANC to bounce back because the nation doesn’t trust it anymore,” said Bheki Mngomezulu, an independent political analyst.

Speaking to the Epoch Times, ANC elections chief, Paul Mashatile, said: “We’ll form coalitions with parties who share our principles and we’ll continue to govern and to do better in cities and towns where we haven’t done well in terms of service delivery in the past.”

One of the basic services that the ANC hasn’t been able to give citizens since 2008 is reliable electricity. Corruption and mismanagement at the national power company, Eskom, means South Africa is regularly plunged into darkness, costing an already battered economy billions of dollars.

Campaigning before the election, DA leader, John Steenhuisen, promised that wherever his party candidates were elected to govern, they would end “ridiculous overdependence on bankrupt and broken” Eskom, and begin buying “clean energy” from independent power producers.

Up until now, the ANC government has resisted large-scale purchase of electricity from IPP’s to aid its failing grid, and to end the country’s dependence on coal to fire its ailing power stations.

“South Africans pay some of the highest electricity costs in the world, when the lights are on, of course,” DA shadow energy minister, Kevin Mileham, told the Epoch Times. “The government also has coal contracts to honor, and unions to keep happy by keeping coal mines open. Obviously switching the nation to green energy will take a lot of money out of ANC pockets.”

But, if President Cyril Ramaphosa is to live up to his commitment at the United Nations conference on climate change (COP26) in Glasgow this week, that’s exactly what his administration’s going to have to do—at least for the next two-and-a-half years. If the results of the municipal polls are repeated in the national, general election in 2024, the ANC—which its former leader Jacob Zuma infamously said would “rule until Jesus comes back”—will be ousted.

Ramaphosa announced that he’d secured an initial $8.5 billion from developed countries, including the United States, and the European Union, to “transition” South Africa “to a low carbon and climate resilient economy.”

The country is the world’s 12th-biggest emitter of greenhouse gases, and has pledged zero carbon emissions by 2050.

A statement from Ramaphosa’s office said Eskom’s coal-burning power stations would be “decommissioned” over the next 15 years, and transformed into “green energy plants.”

No jobs would be lost; instead, more would be created by the move, said the statement.

Ramaphosa’s commitment puts him at odds with his own energy minister, Gwede Mantashe, an avowed critic of the green power movement.

Mantashe recently announced that the fastest, best way to “decarbonize” was “going to be nuclear.”

The ANC energy minister’s support for nuclear is nothing new in South Africa. In fact, successive apartheid governments were fixated by it, going so far as to build nuclear weapons (dismantled in the early 1990s) and the continent’s only nuclear power station, at Koeberg, near Cape Town.

“Notwithstanding the fact that a new nuclear build program is a fiscal impossibility in South Africa’s current economic situation, Mantashe’s obsession with nuclear energy has already been discredited by energy experts as not being the most cost effective way to meet climate policy goals,” said Mileham.

Nevertheless, the ANC’s commitment to nuclear power seems unwavering. In late 2019 it announced plans to build 1 GW of new nuclear capacity by 2030. It also said it would extend the operating lifetime of Koeberg by 20 years.

Mileham said municipalities were at the forefront of delivering electricity, and so should be given the resources necessary “to lock in direct power purchase agreements with independent producers of clean power.”

The DA called for the funding that’s to be given to South Africa to help it move away from burning coal to generate electricity to be distributed “fairly” between municipalities, regardless of which political party or parties they were governed by.

“We’re going to have to watch this money closely,” said Mileham. “The ANC’s track record of managing funding in a proper way is abysmal.”