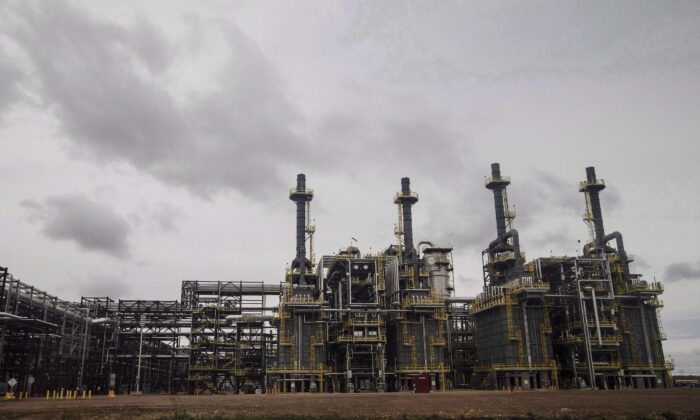 An oilsands processing unit at the Suncor Fort Hills facility in Fort McMurray, Alta., in a file photo. (The Canadian Press/Jason Franson)
Canada

OTTAWA—While most of the world’s attention on Canada is falling on Indigenous protests and rail blockades, the ramifications of the government’s decision on Teck Resources’ $20.6 billion Frontier oilsands mine should not be overlooked. It’s being called another watershed moment for the government, the resource sector, and the province of Alberta.

The mine, north of Fort McMurray with an expected 40-year lifespan, is also a litmus test for Canada’s desire to be thought of as having a reliable, transparent, and predictable supply for foreign partners looking for an alternative source.

Ken Coates, a Munk Senior Fellow with the Macdonald-Laurier Institute, says the mine’s approval process is like running a 100-metre race that turns into a 200-metre event when halfway done. And then 10 metres to the finish line, it extends to a 400-metre race.

“At some point companies are just going to walk away from all of this,” he said in an interview.

“When you look at Teck Resources spending hundreds of millions of dollars to get this far, at some point they’re going to start suing the Government of Canada for breach of faith I think.”

Reliability as an Energy Supplier

The problem is that some in cabinet believe green-lighting the mine project would run afoul of the government’s goal to make Canada a net-zero carbon dioxide producer by 2050 and undermine credibility on environmental issues.

However, it’s been said that, given the technological advances in the oilsands, Canada can play a major role in reducing pollution while continuing to use and develop fossil fuels.

The oil and gas industry has cleaned up its production by leaps and bounds in the last 10 years and is recognized as a model of good governance and transparency, in contrast with authoritarian oil-producing regimes in other parts of the world.

But as the industry seeks to capitalize on the solutions it can offer the rest of the world, it continues to be hampered by the unpredictable or unforeseen.

“If it was turned down then that could send a message to our potential energy customers around the world that we’re not as serious as we talk about being an energy supplier to the rest of the world,” said Jeff Kucharski, adjunct professor at Royal Roads University in Victoria, in an interview.

And if it is not approved, the reasons for its rejection will also be closely scrutinized, he adds. What’s at risk is Canada’s reliability as an energy supplier.

“This will send a message not only within Canada but to the rest of the world,” Kucharski said.

Coates and Kucharski were participating in a Macdonald-Laurier Institute (MLI) panel discussion on Canada’s energy advantage and global energy security in Ottawa on Feb. 18. At the event, experts agreed that as Canada examines its progress on climate change targets, it can’t simply look at projects on an individual basis. Projects have to be evaluated based on their impact on Canada’s aggregate carbon footprint.

The Indo-Pacific region is highly dependent on crude and natural gas, and Canada is in a unique position to take advantage of that, says Kucharski, who is conducting research on energy policy in that region.

“Energy is a strategic issue and not simply a matter of trade,” he said. “Canada should use its energy resources to support its allies and partners in the Indo-Pacific and enhance energy security in the region.”

Energy security means having the uninterrupted and sustainable availability of energy sources at an affordable price.

Jonathan Miller, an MLI senior fellow and an international affairs professional focusing on Northeast Asia, said having “sustainable” in that definition distinguishes Canada from the Gulf States or Russia.

Will Cabinet Approve New Oilsands Mine Despite Trudeau’s ‘Net-Zero’ Promise?

“There’s a demand for Canada now. There’s going to be a demand in 5 to 10 years,” he said, while speaking at the MLI panel.

Thus projects like the Teck Resources Frontier mine, which is expected to produce 260,000 barrels of bitumen a day, is needed to fill global demand for oil.

The Teck mine could also be a milestone for cooperation and reconciliation with Métis and First Nations communities, which are pushing for change and want improvements in the arrangements, says Coates.

“They want to break welfare dependency,” he told the audience.

Coates, an expert on Indigenous affairs, says people don’t understand how much work First Nations communities put into making the decision to support the oilsands project.

“They’ve done a really careful calculus of ‘how do we ever get to wealth and opportunities?’” he said.

The vast majority of Indigenous communities are on board with the Teck Resources mine, and to throw that away by nixing the project could widen the schism between Indigenous groups and the government at a time when the rail blockades show how support has already galvanized for the Wet’suwet’en dealing with the Coastal GasLink pipeline.

“I’ll tell you, as a Western Canadian, people are waking up every morning to see if they’re deciding this,” Coates said. “If they don’t [approve it], the impact of this on Canada can be very very profound.”

The government is expected to make a decision about the oilsands project by the end of the  month.

Steve Laut, executive vice-chairman of Canadian Natural Resources, has been flying the flag for Canada’s oilpatch as a vehicle to lift people out of poverty and reduce emissions globally.

He calls it a “once-in-a-lifetime opportunity” and touts Canadian ingenuity whereby Canada can drive a virtuous cycle of economic, social, and environmental performance.

Oil and gas will remain a material component of energy consumed for decades to come, and whichever country supplies it to the world should have the lowest greenhouse gas intensity and highest standards, Laut says. And that’s Canada’s advantage.