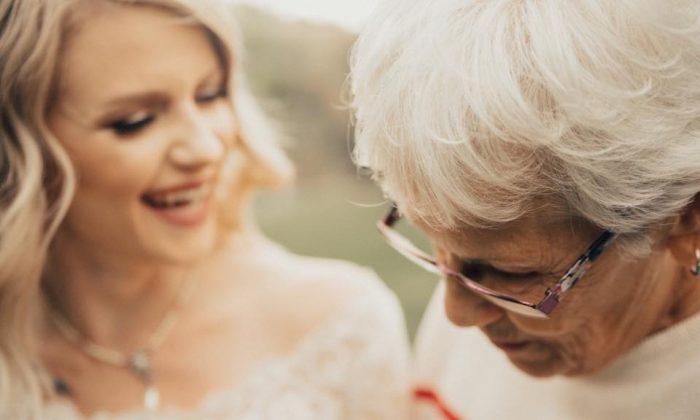 Jordyn Cleverly set her widowed grandmother to tears when she revealed the dress she would wear when she married her high school sweetheart.

It was the dress grandmother Penny Jenson had been married in 55 years earlier, to her own high school sweetheart, a man known only to her granddaughter by stories and photographs, like the one of her in her wedding dress on that special day so long ago.

“A first look unlike any other I’ve done before,” wrote photographer Kortney Peterson on her Facebook post.

“Since Jordyn’s grandma had no idea about her even having her wedding dress in her possession, it made for an extremely emotional moment,” Peterson told The Epoch Times.

“When Jordyn walked out of the house in her dress, Tears were shed by not only Jordyn and her grandma, but also anyone else around watching. Not a dry eye in sight.

“Her grandma was so in shock. It was one of the most beautiful and emotional moments I’ve gotten to capture,” she said.

Peterson’s Facebook post on the moment went viral, garnering headlines from around the world. The photographer’s pictures show a deeply moved grandmother seeing something old become something new.

“Her reaction was one of the sweetest reactions I’ve ever seen. Tears were automatically brought to her eyes, and she kept repeating ‘1962 … Your grandfather would have loved to see this … I married my high school sweetheart in this … and now so will you,'” Peterson told ABC.

Jenson had no idea her granddaughter would be walking down the aisle in the heirloom gown.

“We actually started dating in middle school,” Cleverly told ABC News, describing her wedding as the most spiritual and emotional moment of her life.

“No better way to pay tribute to the legacy of my widowed grandmother. I couldn’t be happier or more blessed.”