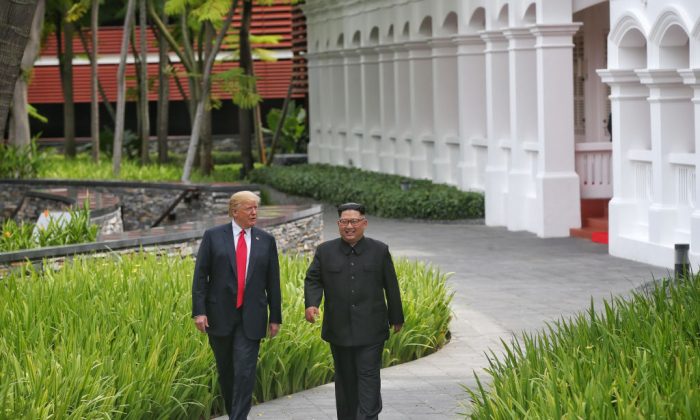 A group of more than 100 experts met several times a week for the past three months devising a plan to dismantle North Korea’s weapons of mass destruction, according to Secretary of State Mike Pompeo.

The White House has been mum about the work taking place behind the scenes to prepare for the monumental task of verifiably destroying Pyongyang’s nuclear, chemical, biological, and missile programs. But Pompeo shed light on the effort in response to a New York Times article that asserted that the Trump administration is ill-equipped to handle the task.

“Any suggestion that the United States somehow lacks the technical expertise across government or lacks it on the ground here in Singapore is mistaken,” Pompeo told reporters at a press conference in Singapore on June 11, the day before President Donald Trump’s historic meeting with North Korean leader Kim Jong Un.

Pompeo detailed an interagency team composed of military experts specifically charged with dismantling nuclear weapons, doctors and experts from the Department of Energy Labs, and members of the intelligence community specializing in North Korea.

“These experts include dozens of PhDs who have expertise in nuclear weapons, the fuel cycle, missiles, chemical and biological weapons,” Pompeo said. “They have advanced degrees in nuclear engineering, physics, chemistry, aerospace, biology, and other relevant fields.”

The secretary of state also said that Trump’s most senior expert on weapons of mass destruction was on the ground in Singapore to address any technical questions that could arise during the summit.

Pompeo’s remarks were likely in response to a New York Times article that suggested the president is “at a tactical disadvantage” to negotiate nuclear disarmament, since he has not appointed a formal science adviser.

That article is part of a larger media trend of liberal outlets seizing on small details to paint a damning picture of the administration. Media coverage of Trump remains staunchly negative despite a roaring economy and historic progress with North Korea. Broadcast evening news coverage of the president was 90 percent negative in the first four months of 2018, according to the Media Research Center.

The media previously seized on a portion of Trump’s statement about his preparations for the summit.

“I’m very well prepared,” Trump told reporters on June 7. “I don’t think I have to prepare very much. It’s about attitude. It’s about willingness to get things done. But I think I’ve been preparing for this summit for a long time, as has the other side.”

Some media outlets covered Trump’s sentiment about the importance of attitude and disregarded the latter part of the same statement discussing extensive preparation.

After the summit with Kim, Trump also told reporters that he used to discuss the subject of nuclear weapons with his uncle, a Massachusetts Institute of Technology professor.

“I used to discuss nuclear with him all the time. He was a great expert. He was a great, brilliant genius. Dr. John Trump at MIT—I think he was there 40 years, I was told,” Trump said. “But we used to talk about nuclear. You’re talking about a very complex subject. It’s not just like, ‘Oh, gee. Let’s get rid of the nukes.’ It takes a period of time.”

The Trump administration is pursuing complete, verifiable, and irreversible denuclearization in North Korea. The task is as complex as the sprawling infrastructure required to make nuclear weapons. Some experts say the process could take more than a decade.

Complete dismantlement would require experts to disassemble the existing nuclear arsenal and ship the parts out of North Korea. Uranium enrichment plants and nuclear reactors would have to be shuttered and taken apart as well. Enrichment plants produce uranium for reactors and weapons, while reactors turn uranium into plutonium, which is an alternative fuel for bombs.

Plants that produce a special fuel for hydrogen bombs would have to be shuttered as well. Pyongyang claims to have tested a hydrogen bomb last year. American experts would have to confirm whether North Korea completely destroyed its nuclear test site and verify that no other sites exist.

Once these mechanical steps are completed, Trump’s verification requirement would require Pyongyang to agree to let experts conduct inspections anywhere in the country on short notice.

“As we do that, we’re going to have a lot of people there, and we’re going to be working with them on a lot of other things,” Trump said at a press conference after meeting Kim. “But this is complete denuclearization of North Korea, and it will be verified.”

Though American officials usually use the word “denuclearization” to describe their goals in North Korea, their broader goal is to eliminate all weapons of mass destruction.

Pyongyang has stockpiled 2,500 to 5,000 tons of chemical weapons, according to The Center for Nonproliferation Studies. The regime may use these weapons as an opening move in a conflict, or sell the technology and the materials needed to produce them to terrorists. These stockpiles would have to be destroyed, along with North Korea’s biological weapons.

Before wrapping up the press conference in Singapore, Trump told reporters that in addition to background preparations, his team has been in contact with various levels of the North Korean regime.

“So when we went into this final agreement, very importantly, we really didn’t go in cold,” Trump said. “We went in with tremendous relationship and tremendous knowledge. And I think that’s why we got it done.”