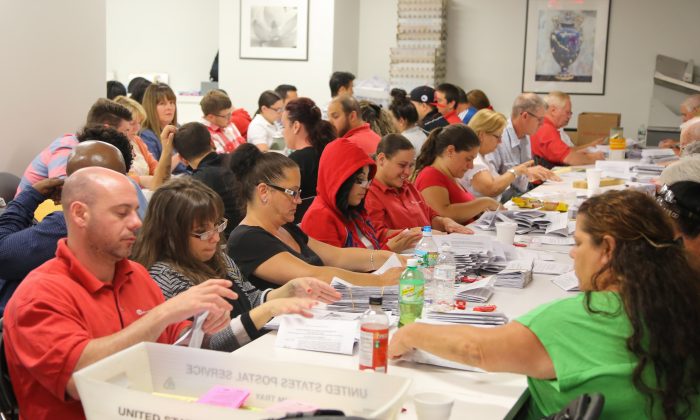 Around 60 ballot counters sort and scan votes on the United Federation of Teachers contract in a basement of a Lower Manhattan building on June 3, 2014. More than 90,000 votes were counted by the end of the day. (Benjamin Chasteen/Epoch Times)
New York

NEW YORK—The city’s teachers voted on Tuesday to approve a nine-year labor contract that includes back pay, 18 percent raises, and reforms of the school system.

The United Federation of Teachers announced Tuesday evening that 77 percent of teachers voted to approve the deal, with more than 90,000 ballots counted.

The finalized deal is a milestone for Mayor Bill de Blasio, who took office with all of the city’s 152 contracts expired. The contract will cost the city at least $5.7 billion by 2020.

The contract includes $3.4 billion in back pay due to be repaid in increments through 2020. To offset the back pay, part of the contract requires the UFT to come up with healthcare savings totaling $1.4 billion.

The contract also sets in motion several reforms. One provision will give teachers at more than 200 schools a greater voice in hiring decisions and in how a school day is programmed. Though the provision impacts only 10 percent of all schools, it is notable because participating schools are allowed to breach both DOE guidelines and UFT contract provisions—breaking the bonds on a bureaucracy many teachers and administrators have found stifling.

The contract will also make it easier to remove teachers who violate professional standards, expand the definition of sexual misconduct to include cell phone text messages, and simplify the teacher evaluation process.