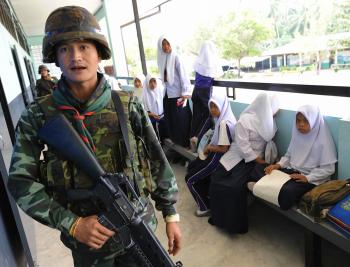 Having finished a day’s work, Atcharaporn and five of her fellow teachers left their school in a pickup truck but were soon stopped by a group of armed men on motor bikes.

Dressed in military clothing, two of the armed men approached and after the first man told the driver that a bomb was placed on the road ahead; the second man proceeded to fire his assault rifle at the teachers. Atcharaporn died on her way to hospital while another female teacher Warunee Nawaga died on the spot. Two other teachers in the vehicle were wounded.

Both of the slain teachers were Thai Buddhists, and local media reported that the surviving four teachers, who were Muslim, told police they thought that the two dead teachers were selectively targeted by the gunman.

A report released this week by New York based Human Rights Watch (HRW) says that ethnic Malay Muslim separatist insurgents are suspected in the killing of at least 108 government teachers and 27 other education personnel in Thailand’s southern border provinces since January 2004.

This year alone, 14 government teachers have been killed with the most recent being on Sept. 4 when insurgents murdered two teachers who were also husband and wife.

The report says that the vast majority of teachers and other education personnel killed by insurgents in the predominantly Muslim region have been ethnic Thai Buddhists. Insurgents have also targeted ethnic Malay Muslim teachers at government schools and those Islamic school administrators who resist insurgents' efforts to use classrooms for indoctrination and recruiting.

“Being a teacher in southern Thailand really means putting your life on the line,” said Bede Sheppard, senior HRW Asia researcher for children's rights. “In addition to be singled out and assassinated, teachers have been harassed through the use of pamphlets, anonymous telephone calls, and in one instance the posting of a bounty on the Internet for that [particular] teacher’s head,” he told a press conference in Bangkok.

Teachers are considered “soft targets” that are easier to hit than Thai security forces.

In addition to attacks on teachers, Sheppard said, there have been at least 320 cases of arson attacks on schools and teacher housing over the past six years.

“Schools and teachers have been targeted for attack by the separatist Muslim insurgents because they are seen by the insurgents as a symbol of [the] Thai government’s oppression of the local Malaya Muslim community,” said Sheppard.