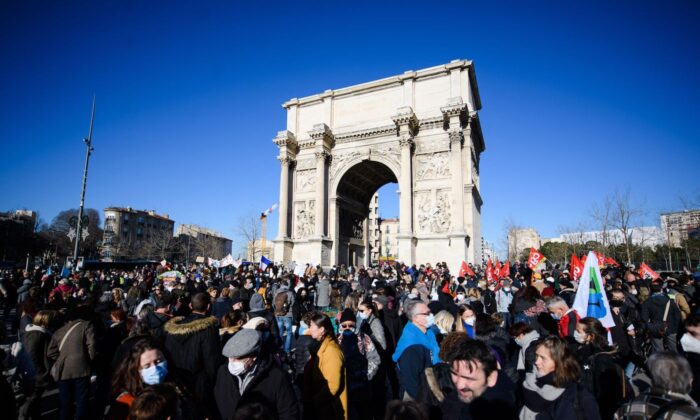 Teachers and school personnel gather during a demonstration called by teachers' unions to denounce "an indescribable mess" because of the new government's measures against COVID-19, in Marseille, southern France, on Jan. 13, 2022. (Clement Mahoudeau/AFP via Getty Images)
WORLD

Teachers across France staged a mass walkout on Thursday in protest over the government’s ever-changing COVID-19 rules for those working in the education sector which they say fail to protect both staff and students.

The French Ministry of Education estimated that around 31 percent of all school teachers across the country took part in the strike on Thursday, 38 percent of whom worked in primary schools and nearly 24 percent in secondary schools.

A statement from the Mayor of Paris’ office said that in the capital city, roughly 58 percent of the teaching staff took part in the strike, and around 200 schools were forced to close, although trade and teachers unions put those figures much higher, at 75 percent.

The protests came as teachers across France are growing increasingly frustrated with the government’s ever-changing policies regarding the pandemic which has seen testing rules for children changed several times since the start of this year alone, oftentimes at the very last minute.

On top of that, educators say the government’s approach to the pandemic is failing to protect children or ensure replacement cover for teachers who are falling ill with the coronavirus. Unions are also calling on the government to provide more protective FFP2 face masks for staff as well as carbon dioxide monitors in classrooms so that they can ensure that they are sufficiently ventilated, as per The Guardian.

Despite a surge in virus cases in schools across France, which have reached record highs of close to 370,000 new daily cases, the government has so far kept classes open and required all pupils in contact with an infected person to get tested three times.

“We had reached such a level of exasperation, tiredness, and anger that we didn’t have any other option but to organize a strike to send a strong message to the government,” union leader Elisabeth Allain-Moreno said.

On Monday, French Prime Minister Jean Castex announced that the rules were changing yet again, telling  TV station France 2 that students would now be required to take three self-administered COVID-19 at home, which will be free, as opposed to having PCR or antigen tests and then two self-administered tests on day two and day four.

“This will have an effect on the queues [outside pharmacies],” Castex said.

But on Thursday, Snuipp-F.S.U., a leading union of elementary school personnel, criticized the government for allegedly updating the rules via the media as opposed to informing teachers beforehand.

“The prime minister’s televised speech ignoring the demands of personnel has once again demonstrated government contempt amplifying their anger and their mobilization,” SUNipp-FSU said. “Once again, the protocol relief is announced in the media, and staff in schools must respond from this morning to family questions without any official instructions.”

The union stressed that the mass protests were not “a strike against the virus” but illustrated the growing frustrations among teachers, noting that the lack of replacements for sick teachers is adding extra pressure on the education system.

“Not only does the current protocol fail to protect students, staff, and their families but it also completely disorganizes the school,” SUNipp-FSU said. “Under current conditions, students cannot learn correctly.”

France has seen dozens of protests in recent months over the strict measures that have been put in place across the nation in response to the COVID-19 pandemic.

The country has enforced a health pass, meaning that people have to show either proof of vaccination or a negative test to enter restaurants, cafes, and bars, visit cinemas and use inter-regional trains.

President Emmanuel Macron has been outspoken about his thoughts on those who refuse to get vaccinated and promised to make their lives miserable, which sparked backlash across the nation.

“I’m not for pissing off the French … Now the unvaccinated, I really want to piss them off. And so, we’re going to keep doing it, until the end. This is the strategy,” Macron said during an interview with Le Parisien earlier this month.

Macron added that while he “won’t send [unvaccinated people] to prison”, he “will make their lives more complicated and encourage people who refuse to get vaccinated to do so by “limiting as much as possible their access to activities in social life.”

France is one of the most highly vaccinated countries in the world, with more than 90 percent of people aged 12 and older being fully vaccinated.