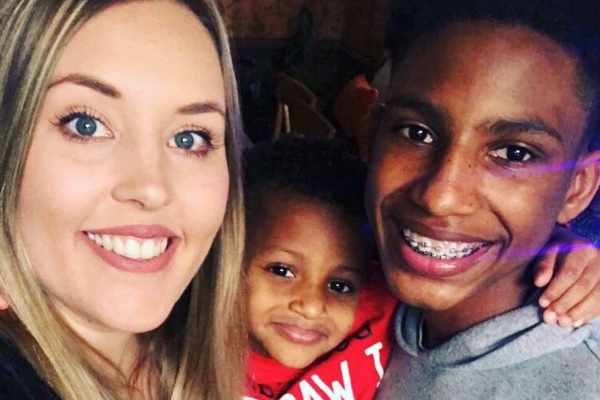 A fourth-grade student made life such a nightmare for 24-year-old teacher Chelsea Haley that she nearly quit her job.

Haley joined Teach for America to try and make a positive impact in a low-income school. However, she met her match—Jerome Robinson, who was at the time, a notorious troublemaker.

“At certain points, his behavior got so bad,” Haley told CNN, “I thought, ‘I can’t do this anymore. I can’t be a teacher.'”

However, the two began to form an unlikely bond in the elementary school she worked at in Baton Rouge, Louisiana. While Haley struggled in class to control Jerome, she somehow managed to gain his trust, after which followed an unlikely bond.

Other teachers, who also had problems controlling Jerome, would eventually send him to Haley’s classroom, where she was able to make him productive. “I got a lot of thankful emails and knocks on my door,” she told CNN.

At the time, in 2015, Jerome was living with his birth mother, who had gone through a particularly rough period.

“It was really hard on her after she lost her husband,” Haley told the network. “A little sister also passed away. “It was just a combination of tragedy coupled with the other social situations you face when you live in poverty.”

Jerome and his newborn brother, Jace, were forced to move around often and ended up spending a lot of their time living with their grandparents.

After finishing her two-year program with Teach for America, Haley felt something like her work wasn’t done yet. The principal at the school suggested she should “stick around ‘for Jerome.'”

Haley said she then had a dream where she felt God “telling her she was destined to be Jerome’s mother,” according to CNN.

While she reportedly thought the idea was “preposterous” at first, she had a peaceful feeling the next day while Jerome was alone with her taking a test. And then came a strong hint.

“He just asked me if he could live with me,” Haley recalled. “I told him I had been feeling the same thing.”

The teacher planned to return to Georgia soon after, and told the boys’ mother that she’d be leaving soon, but then came a stronger hint:

“You can go back,” the mother told Haley, “But I want you to take Jerome and Jace with you.”

“You have to be 12 years older than somebody to obtain custody of them, and I am 12 years and three months older than him,” she told the network.

Haley is now a 26-year-old middle school teacher residing in Marietta, Georgia. She said that Jerome has improved immensely and that he doesn’t fail classes anymore like he used to.

In a Saturday, Feb. 3, Facebook post, Haley wrote about Jerome’s recent report card, adding that “the kid is serious about wanting a scholarship to college one day!”

“I always knew I wanted to be a mom and I wouldn’t trade this for anything,” Haley told CNN.

But the unexpected mother said she is struggling financially to make ends meet. A GoFundMe page has been created to help the family.