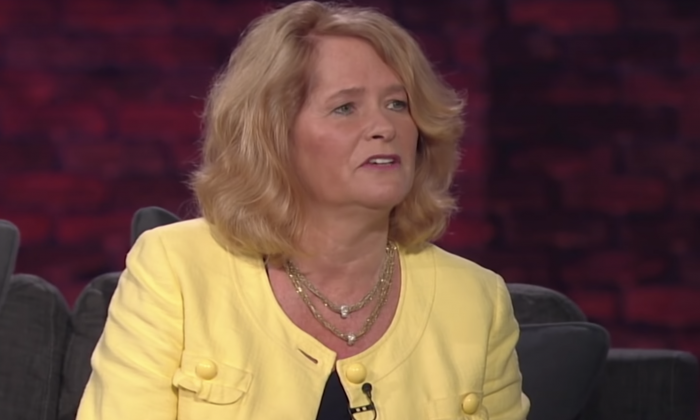 Karen Siegemund, who says she was fired from her teaching job for praising Western civilization. (Huckabee/YouTube screenshot)
US News

California math teacher Karen Siegemund says she was fired for making a speech outside the classroom in defense of Western civilization.

Siegemund, president of the Los Angeles-based American Freedom Alliance and who holds a doctorate in education and American culture, spoke in May at her group’s “Long March Through the Institutions” conference, which “explored the Left’s ongoing multi-decade takeover attempt of numerous public and private institutions to effect a radical transformation of America.”

The phrase, “The long march through the institutions,” refers to revolutionary change effected by incrementalism and was coined by German student leader Rudi Dutschke in the 1960s, though it is widely misattributed to Marxist theorist Antonio Gramsci, according to Marxist academic Joseph A. Buttigieg, the late father of Democratic presidential candidate Pete Buttigieg.

During the offending oration, Siegemund said, “Each of us here believes in the unparalleled force for good that is Western civilization; that is our heritage, whether we were born here or not.”

Soon after the address, she was told her teaching contract at Le Lycée Français de Los Angeles, a private K-12 school, wouldn’t be renewed, The College Fix reported.

“Because of my outside activities, I was told my contract would not be renewed. I praised Western civilization, and how it’s brought the greatest good to the most number of people, and we are all its beneficiaries, including those not even from here, and that was deemed hostile,” she said.

Huckabee asked her, “Surely you did not just get fired just because you believe in Western civilization?”

“I see myself as an educator, and I want all my students to learn critical thinking, to explore, to be skeptical, to value those things that we value, to grow as an individual, that’s always been my stance, which I guess is also problematic,” she said.

“Because there are other teachers who denigrate the president in the classroom, who wear ‘resist’ tee-shirts, who promote all kinds of various leftist policies in the classroom—that’s apparently fine—because their contracts have been renewed.

Siegemund’s GoFundMe page, which was created in May by Michael Greer, vice president of the American Freedom Alliance, states:

“Karen lost her job because she was ‘teaching while conservative.’ As many, many others have. How is this happening? How have we allowed it to get this far? The Long March conference on Sunday revealed exactly how. But the time to stop it is NOW.”

The page is designed to raise money for Siegemund’s lawsuit against the school.

“So donations will in large part go to supporting this legal battle,” according to the page. “They will also go towards fighting this on other fronts such as educational and cultural ones.

“It’s clear from the comments, the emails and [Facebook] messages that people are outraged at what has happened to Karen, and they recognize that this is a sign of a loss of freedoms here in the US – Karen is one of countless, countless others, and is standing up to this injustice not just for herself but for all of us who are discriminated against because our viewpoints aren’t the accepted ones.”